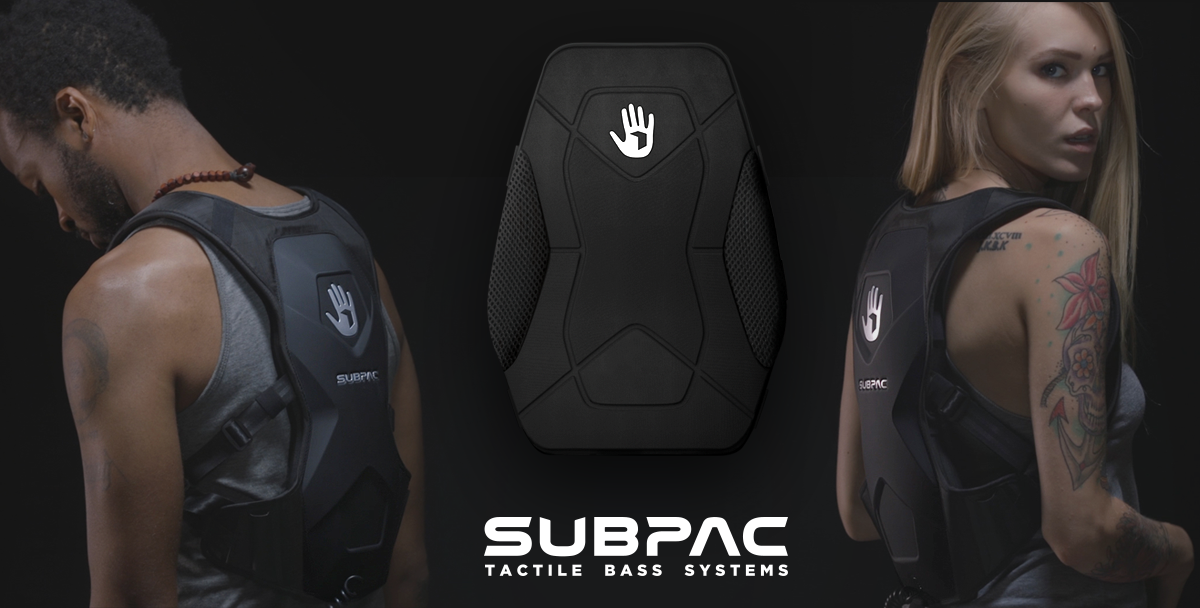 SubPac have been making waves within the electronic music scene for a few years now, with many artists/djs and producers utilising their products when playing or creating music. The idea of feeling music is one that many people agree with for bass music. So we thought it was only right to have a chat with SubPac to find out more about their products and the technology behind it. Steve Snooks, an employee at SubPac who has been working within music for an number of years, sat down with us for a chat.

Tell us a little about how the idea of the SubPac first started?

The concept of SubPac was conceived by our Founders John and Todd after attending DnB raves back in the day in Canada.

How did you get involved?

I was working at Blackmarket records when our founder John and the first EU team member James came in, they were going around all the best music spots like record shops and festivals spreading the word. I was blown away by the idea and got on with them great so jumped at the chance to get involved. The rest is history.

Do you do this full time?

Yeah I do, I gave up selling records at Blackmarket (RIP) and Dub Vendor retail to sell and promote low frequencies full time. I still make music, run my label and do the occasional bit of graphic design but all my energy is focused on pushing the concept of physical sound now.

Subpac is all about physically feeling sound. What are the main differences between the range of SUBPACs you offer? Are some suited best for particular activities?

We currently have two commercially available products. The S2, a device that attaches to a seat-back that is prominently used by music producers/sound designers and gamers/film fans. The M2 is a wearable version that can be used in the same context but has had massive support from gamers especially for VR experiences. There are also many DJs, drummers and bassists who like to use the M2 to accompany their feedback monitors/speakers in live situations.

What does the future hold for SubPac? Are there any upcoming projects you can discuss with us?

There are so many things we are working on, this technology will extend far beyond music production over the next few years. We worked on a concept car with Peugeot, opened cinemas in South Korea and have recently launched the Feel project with lots of amazing creative people across many disciplines. The things that really get me going are the projects within the deaf and hard of hearing communities. We were recently featured on the BBC One Show with our choreographer friend Chris Fonseca. He was using M2s to teach a deaf couple a dance routine for the first dance at their wedding. We have many more things in the works but you will have to keep an eye on our socials…. ha

FEEL SubPac is a new project created by StudioFeed. What are the aims of this platform?

Feel is a great platform to showcase the creative output of our affiliated artists. Fans can come and get free tracks created especially for or mixed with a SubPac, watch production tutorials, get sample packs and we are also adding ‘SubPac optimised’ film and VR content.

From a mechanical perspective, can you briefly outline the technology behind SubPac? How does it respond to the bass frequencies?

We use tactile transducers. They do not respond to the bass frequencies, what you feel is exactly what is going on in the track/content. Its very similar to how a speaker works but your body is the medium for the sound as opposed to the air. This is the reason they are used by producers as avoids the issues you have with acoustics i.e the space you are working in will not necessarily give you an accurate representation of what you will experience in a club or other spaces designed for music playback.

What would you say are the benefits of using a SubPac for producing/djing?

So many! The main ones being portability (how many djs/producers can carry a sub woofer around with them?) and also being able to produce or monitor at low volume levels so you are not damaging your hearing or annoying anyone around you. Since using SubPac I find I can listen or produce for much longer periods too! We are also seeing a lot of DJs and musicians using the wearable M2 onstage as it is a much better option than blasting your ears with monitors to get that bottom end we all crave!

You’re on a desert island, with only one track and one SubPac to take with you. Which track and SubPac do you take?

Mmmmm would definitely be the wearable form so I could jump around with it… one track though.. that’s a hard one.. if it was an island somewhere hot it would have to be a classic dub/reggae recording. Can I have an album?? I’d have to have a track from Dennis Browns album ‘Visions of Dennis Brown’.

What’s your favourite album/ep to listen to on the SubPac?

This changes on a daily basis.. At the moment I’m on a bit of a Prog/Experimental rock binge so I’d say either Yes ‘Close to the Edge’ or Can’s ‘Tago Mago’.

Favorite film/game to use the SubPac with….?

Blade Runner Director’s Cut for sure! Vangelis through a SubPac is amazing!! Game wise I’m playing a great music based one from some of the guys that worked on Guitar and DJ Hero called ‘Aaero’ at the moment. Lots of bass heavy tracks on that!! Check it out, its 100% better with a Pac on your back! I also like a music violence game called Thumper.

In a year’s time where would you ideally like to see SubPac?

In cars, cinemas, themeparks, galleries and your Nan’s yard!

Check out SubPac on Twitter and Instagram. Thanks to Steve for chatting to us and look out for more news from Subpac in the coming weeks!