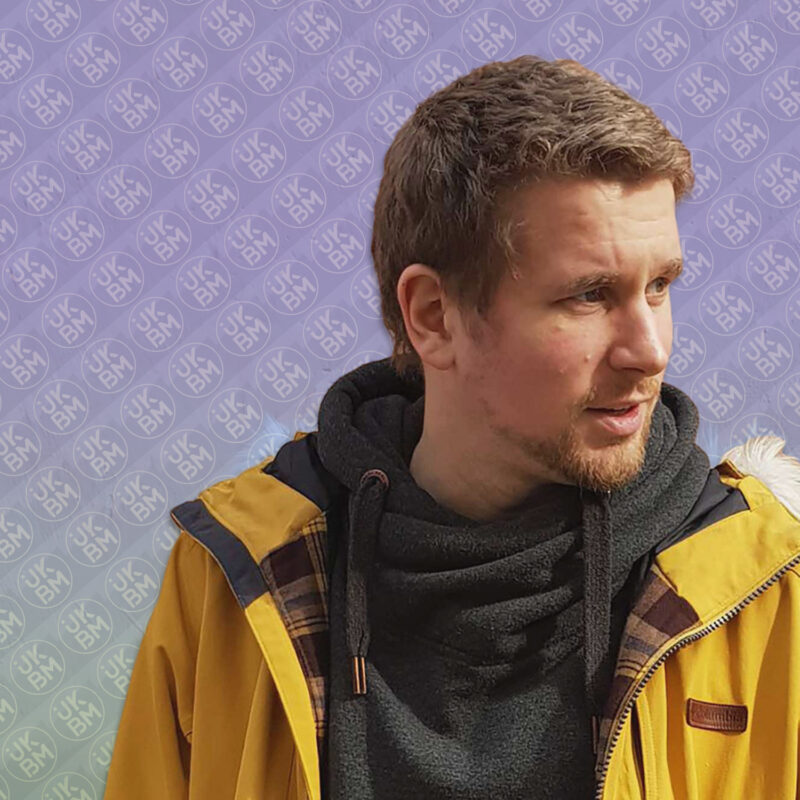 Scottish-born Stillhead has announced the release of his latest album Restraint and Reverb, due to be released on vinyl and digital on 12th August. The album will be released on his own label Brightest Dark Place and highlights the sonic range this producer is capable of.

Never being pinned to one genre, label-owner Stillhead amalgamates the sounds of drum and bass, dub-techno, breaks and everything in between (as can be seen in the mix he recorded for us!). However, you know when you’re listening to the artist, formerly DFRNT, due to the sense of ambience he forges. It is immediately evident that Stillhead draws from his experience in scoring films when crafting his Nordic electronica-inspired beats.

The album opens with the track Sick Fing, which is available to download and stream right now. This groovy garage beat presents a heartfelt melancholic feeling whilst broken beats pepper the track, keeping the listener constantly engaged. It is easy to see that the driving force behind the track Driving Force is the bass. The jungle-style bassline is the perfect accompaniment to the atmospheric choice of sounds and samples. One of the latest singles, Sexual, shows a more downtempo and ambient side to the artist with every element placed in the arrangement with intent. The whole album is about creating a mood and it does it so celestially.

We caught up with Stillhead about the album.

First of all, I would like to congratulate you on the album. It is such an encyclopaedic patchwork of genres and sonics that bends the rules of genre. For those who don’t know you, how would you sum up your journey so far?

Thank you! It sounds super cringy, but I feel like my musical production journey is still in its infancy. I’m still scrabbling with bits of my DAW, and discovering wild new ways of doing things all the time.

In terms of musical discovery and certainly influences, that journey keeps pushing forward, but I’ve been into so many different styles that I guess my big problem is keeping myself in check and making sure that I don’t go too overboard with packing genres into releases.

Nobody wants an album that feels too much like a random collection of artists, but I do like the idea that people listening might want to be challenged in a way since I’m sure people also don’t want the album portrait of an artist who can’t seem to break his own cycle of production habits.

In terms of my journey as Stillhead (and DFRNT prior to that) I’ve been a bit all over the place, and although there’s definitely a “theme” somewhere – something reasonably intangible that one might see as a thread throughout all my musical endeavours – I think I’m getting to the point now where I’m just doing what I want to really. I’ve tried to play “the game” as it were, and the industry is an absolute minefield to be honest, so I just make my music, do my little thing here on the side, and if it works and people like it – great!

Is there an overarching theme to Restraint and Reverb?

I’d love to give you an interesting answer to this, but there’s not really.

I knew I wanted to call the album that for a while, and I knew more or less that I wanted it to be “deep and dubby” stuff which is my go-to means-nothing-term for just about everything I make. But the album feels more like a little snapshot of some of the bits that seemed to work together; that were all made in more or less the same slice of time!

How do you pick sounds and samples that, on paper, seem so contrasting but appear so perfectly forged together?

I Bob Ross the shit out of it. Happy little accidents everywhere haha.

I like thinking conceptually about things, like “what if a dub-techno artist wanted to make footwork”. I feel like maybe I’m one of these insufferable music producers who are always on the hunt for a new genre to try and invent, so my production work doesn’t involve me doing the same thing over and over hoping for a different result. It is often triggered by thoughts about how I can push certain walls and rules when producing – while still trying to keep firm control of the overall feel of the output. I mean it still has to sound a bit like me, after all.

I do also spend a substantial amount of time crafting sounds so they feel like they fit the tune – despite the origin of the sample. I don’t like anything to feel too rough or out of place – this is my cross to bear hahaha.

With such a breadth of feeling and groove in Restraint and Reverb, do you think this project is more for an intent listen or the dancefloor?

Some of the tunes felt like they’d work for the dancefloor which is unusual for me, while some are firmly in the “put your damn headphones on” camp – so I’m torn on that one.

Ultimately I’d like to say both, but my ideal listener is someone who has a good set of cans, a comfortable seat, about an hour to spare, and some patience for deep and dubby sounds.

Who are your influences for both this album and generally as a producer?

Generally, my influences change all the time – and it can be as fleeting as a single track from one producer, through to an entire catalogue from others.

I’ve always been aware and tuned in to what Felix DjRum is doing and quite often I’ll go back to Portraits With Firewood to remind myself what a perfect album sounds like.

I’m a big fan of Travis Machinedrum’s output, and he helped me with a couple of the tracks on the album through some pretty extensive feedback. I’m always keeping an ear on his work since he’s really pushing boundaries.

I’m still a big fan of the Nordic Electronica Allstars. That’s not an official name or anything, just my hypothetical catch-all for the likes of Lulu Rouge, Mike Sheridan, Of Norway, Tonik Ensemble, Mr Roque, Gidge and a stack of other Northern European artists doing brilliant things with deep electronic music.

I also find inspiration in the endeavours of others even when it’s not necessarily their production, but just the energy and the heart they put into projects.

People like Will Hatton who is going full-time, putting loads of work into his videos, Patreon and Discord. His outlook is always refreshingly positive.

People like Craig Massey who has this wild work ethic and puts so much into his Truth Hz label and projects and the incredible Bothy Bass collaboration he has with his friend Miles under the affa.fine banner – Massey’s discord is quite the hive of activity and feels like this wild melting pot of talent and comedy.

People like Ben Bunzer0 who has been recording and pushing his radio show for so long, but somehow magically keeping the quality and consistency of his output top notch. His show is something of a constant in a rapidly changing world right now!

I’ve also had a boost of energy from John B (the drum & bass producer and DJ) whose Twitch streams I discovered through a friend and they have opened up this world of music, gaming and community to me that has started to build opportunities and connections for all sorts of things. The genuine nature with which John goes about his projects is inspiring, even if I’m still struggling to make decent drum & bass myself. His approach is very inspiring. I’d say he’s the reason I started streaming myself too.

This album definitely pays homage to your days as DFRNT with a lot of the basses – do you think DFRNT is a project you will ever return to?

I sometimes think “I should get something going under the DFRNT alias again” and then I remind myself not to be so concerned with trying to milk that stone. If I’m honest with myself the only reason I’d do it is that I feel like it would get me more listens, or increase my audience and I don’t think that’s a good enough reason for making that creative choice.

The switch lost me stacks of listeners and “status” I guess, but it gave me the creative freedom and the ability to start things over fresh, without feeling like I had my older tunes and certain releases I wasn’t happy with as a crutch (or a ball and chain depending on how you look at it). It also freed me from the tedious chat I used to get about “oh but you ARE actually different” and “is it Different or D-front” and all that, which no longer happens.

The worst I get these days is “oh, wait, you were DFRNT? No way, I really enjoyed x, y and z” which is a far nicer way to remember those days.

I have fond memories of the project, don’t get me wrong – but it won’t be getting resurrected. At least that’s my answer today.

Where can people catch you playing this year?

Well, I’ve started streaming on Fridays, so the easiest place people can see me play is on Twitch and I’ve been doing mostly drum & bass there, but feel like I need to diversify my DJ sets, so I don’t end up getting just D&B bookings.

If you want to see me actually in person, right now there is just one booking. I’m going to be playing a set of my own Stillhead stuff (and probably having a play with things like effects and some live elements) for a small festival called WFR North on Saturday 22nd October, here in Edinburgh. It’s the guys at Werra Foxma Records who are arranging that, and I’m looking forward to being part of their event.

You can preorder the release for the release on 12th August but until then you can check out the first track from the album Sick Fing and Sexual now! Whilst you’re waiting for the album check out Stillhead on Twitter, Instagram, and Bandcamp.