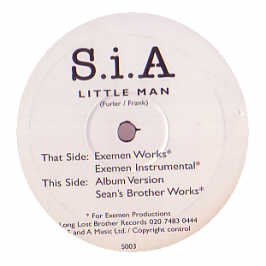 When you hear that steel pan melody in a dance, you know what time it is!

After the first two notes, the crowd goes mad, gun fingers come out in preparation for the dutty bassline that follows, then sing along crew go HAM for the chorus.

Garage connoisseurs will know that Exemen is an alias of producer Wookie.  Sia was relatively unknown before the success of Exemen’s remix of Little Man.  Back when it was released in 2000, it got a real buzz on pirate radio, but raves are where the track fully shone.

Little man takes me back to being a teenager, out with my girls in under 18’s raves, singing along ‘Little man, I’m endlessly proud of you.  In such a short time span…’  Those days it was the thing to be a garage girl, and you were looking forward to a night out, so you could put on your raving shoe and skank out with your crew. Pure vibes. More vibes than vibsing in your bedroom to your favourite radio show on TDK.  The same heads would frequent regular events, and you’d make friends in the scene, making every event a serious link up.

Sia’s sultry vocals on the track will never lose impact, just as the Wookie-esq bassline still creates a vibe. To this day the crowd will go mad in a rave for this one.