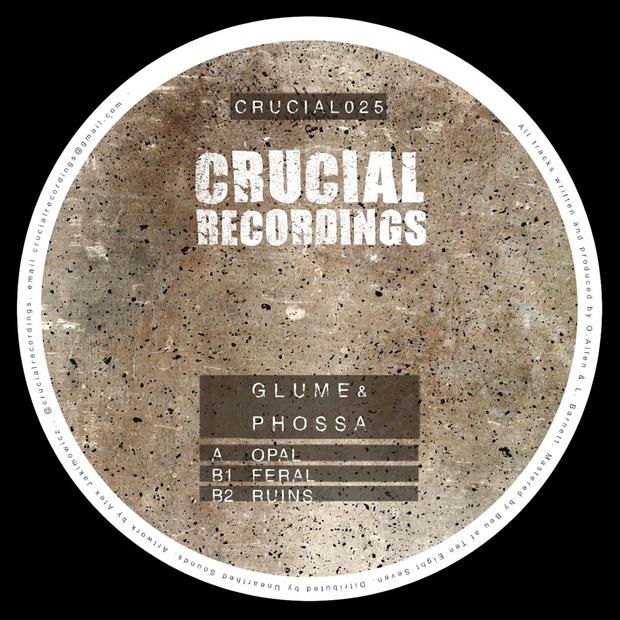 Glume and Phossa are well and truly making their mark.

The two Bristol-based producers have been lighting up the scene with their dark productions over the past couple of years and have without doubt carved out their own signature sound, influenced by Dubstep and Grime.

Their back catalogue reads impressively, with releases on labels such as White Peach, Subaltern, Hotplates Recordings and Albion Collective.

The next record comes courtesy Crucial Recordings which is run by Sleeper.

Entitled Opal EP and made up of tracks Opal, Feral and Ruins, this is arguably their finest work to date and perfectly encapsulates their sound and also their variation.

We caught up with the boys to chat about this new exciting release and to get to know them a bit more.

Congratulations on the new EP with Crucial, can you tell us how it came about to putting something out with them? And also can you tell us a bit about the tracks on the EP?

Glume: Thanks, yeah we’re really excited for this one. Been listening to Crucial releases for a long time so it’s great to be involved. I think Sleeper came across our Soundclouds and just asked to listen to some more music.

It was the second batch of tunes we sent that had Opal in and we took it from there really. Its was quite an intense couple months of writing music after he took Opal to go with it for the EP, we wanted to make sure it all fit together nicely. There was a lot of music, that although we liked, just didn’t quite fit the EP but it was great for productivity.

Phossa: Yeah we’ve been a fan of Crucial’s releases for a while now so it’s great to have our own. With the other two tracks on the EP we really wanted to create something that combined our own sound with labels sound. It took time but we were pleased with the result. The third track on the release, Ruins, was a nightmare to finish up, I think we must have been passing that project back and forth for the best part of a year.

How did you collaborate on this EP and in general when you make tunes together? What’s the process?

P: We try to get ourselves in the same room making tunes as much as possible really, it’s a lot easier to bounce ideas off each other that way and I’d say we often end up experimenting a little more.

G: Yeah I’d say it usually works best in the same room too but we’ve had to get used to producing remotely more since uni and we’ve definitely got better at it. I think a lot of what makes it easy is the fact our creative processes are similar, we learnt/taught each other a lot while at uni and therefor use a lot of the same tools in similar ways.

Can you tell us a bit about how you got started with production and your journey so far with music?

P : I started by playing the guitar so it kind of slowly developed from there over time. My first early attempts at production would just be me recording guitar parts in to Logic and programming drum parts to go along with them. I gradually started listening to more and more electronic music and that made we want to get more involved with it.

G: Similar to Phossa I also began by playing guitar but in Metal bands when I was young and and I was learning Jazz later in my teens. I don’t think I touched production till I was 16 when me and a mate got FL Studio for iPad. It was more of a toy than anything. However it got me really into Dubstep and loads of other club music and before I knew it I was at college learning digital music production. I experimented loads with genres but I think I became ‘Glume’ near the end of college and generally stuck to 140 from then.

G: I think my inspiration probably comes from loads of places, I listen to a lot of music. Growing up in my house we listened to a lot of world music, mainly from places in Africa and South America, which came back to play a big part in my general listening and inspiration at uni. I feel playing jazz probably had an effect on my use of melody in productions but yeah I guess in general I try to just keep listening to new things, keep taking stuff in.

P: Yeah, I also take inspiration from a lot of different places. It’s hard to specify where my main source of inspiration comes from due to the fact that I’ll be inspired by something/ someone different every day. My inspirations can often be very contrasting as well so is hard to pin point specifics but I try to mash as many of them in to my music as I can.

What are your thoughts on the Dubstep scene at the moment?

P: Loads of producers are doing really interesting things in the dubstep scene at the minute, there are a lot more aspects from other genres being thrown in to it and the line between ‘dubstep’ and ‘not dubstep’ seems to be becoming a lot more blurred. More people seem to be going forward with that mindset as well which I think is definitely a good sign.

G: I feel a little mixed. I really agree with Phossa on the blurring between dubstep and not dubstep thing, I think we both find that exciting and our music seems to reflect that more every time we write currently. I do sometimes find the scene a little claustrophobic, a lot of ‘sameyness’ and simply just the size of it, it’s pretty damn small, which obviously has its up sides too. I think there’s a lot of potential in expanding the sound of 140 though and that’s what I find really exciting.

How much has Bristol had an influence on your music? Do you have plans to ever move anywhere else or would you like to stay?

G: I think Bristol altered my productions dramatically. I was really taken in it when I moved here. Such a strong sound and music culture which I think will always play a part in my production now. However, I think I am ready to experience somewhere else for a bit but its a place I see myself coming back to for sure. I think Berlin is next on the cards.

P: Bristol has definitely had a massive impact on my music, I wasn’t even really listening to 140 before I moved here. I was mainly listening to and producing more House influenced stuff at that point so yeah, was a definite change of perspective for me. Also I’m not living in Bristol at the moment but I visit on a regular basis, there’s too much going on there not to visit.

“The line between ‘Dubstep’ and ‘not Dubstep’ seems to be becoming a lot more blurred, which I think is definitely a good sign” - Phossa

What are your aims with music? How far would you want to take it?

G: I don’t know, I don’t like to plan too far ahead but I know I will never stop wanting to write music. I think ideally to continue to work with Phossa and solo to really see what happens to our sound and where that ends up taking us.

P: Ideally I’d like to be doing something music related for a living, me and family have recently taken over a recording studio and music shop as well so if all goes to plan that might be a possibility.

If you weren’t making music, what do you think you’d be doing instead?

G: Haha I have no idea, it would have to be something creative. I recently started work as a sound designer which is great fun, but I assume that’s classed in the sphere of music? Me and Phossa have spoken about how cool it would be to write a film but that’s not super realistic.

P: Haha yeah we often come up with ideas like that but they rarely materialise. But yeah I’m not sure I have an answer that question to be honest, I’ve been writing music on a daily basis for years now so is hard to imagine anything else.

Is there anything else up and coming in the pipeline for either of you?

G: I think we have another two 12” EPs sorted after this one and I have a solo record coming out soon as I find the time to finish off the tracks. But yeah otherwise we are just trying to knuckle down and get a whole load more music done, lots of plans for next year.

P: Yeah I’ve got some solo music coming out on vinyl this year as well as collaborative stuff with Oskar. Next year we have lots of secret things in store.

Glume & Phossa – Opal EP is available to by NOW so make sure you cop that.