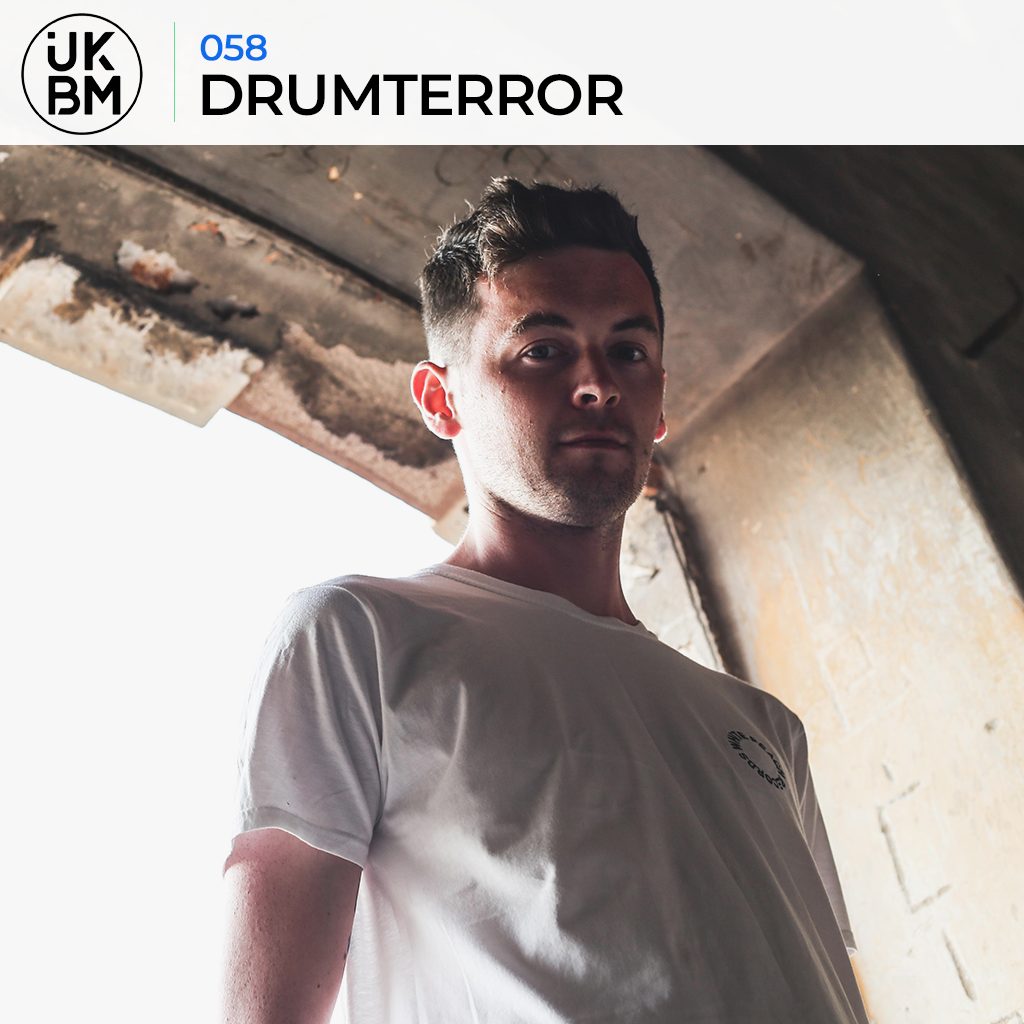 Drumterror is one of the most exciting producers making 140bpm music right now.
His productions have been supported by the likes of Mala to Spooky which is a testament to his high quality and varied production style, focusing on complex soundscapes and melodies encompassed by deep basslines perfectly displayed in his most recent release, a self released 4 track EP called Isolate/Congregate, much loved here at UKBM.
He also holds down a residency on London radio station Subtle FM where is showcases his sound via his meticulously put together sets.

With great excitement we present to you an exclusive mix from the man himself which serves as our 58th UKBMix. We caught up with him beforehand to talk about the mix and he had this to say;

I try my best to blend a varied selection of what I’m listening to and influenced by in my mixes, and this one was definitely no exception.

Regarding some of the selections and artists you may not recognise – there was an interesting article a while back about these faceless artists on Spotify who basically exist to flesh out playlists, and just churn out ‘stock’ music as it were. Well, I really started to delve into a few of these ‘fake’ artists, where I’d heard a beat I liked and checked out further if there was anything else that had been recorded under that alias, and that’s exactly what the intro from ‘Silver Maple’ is. It’s linked back to some huge production company out of Sweden, and whilst I don’t necessarily agree with the ethics of the whole ‘playlist fodder’ thing, the music itself is actually pretty beautiful. There’s a few tracks I’ve played recently from that library.

Besides that, I’ve included an extremely industrial 140 techno track from this fantastic producer Atsushi Izumi out of Japan, which absolutely SLAPS on a soundsystem. There’s a couple of fresh cuts from myself, including a remix for Kutkh Jackdaw, who’s a really cool producer I came across a few months ago who takes inspiration from EBM, 80s electronica and post-punk music, definitely worth checking out if you want to expose yourself to something a little bit different.

There’s a couple of really dope vocal tracks in there too – Big Zuu and Jelani Blackman recently dropped this track ‘P2P’ which has wound its way into nearly 100% of my sets recently, because it’s absolute FIRE. I’ve been getting ID requests on that one nearly every time I drop it, Jelani in particular is a name you need to seriously keep an eye on. I also included the rare VIP mix of Funtcase’s ‘Everybody Knows’ featuring Foreign Beggars in homage to Metropolis, who unfortunately passed away recently but absolutely slays the first verse in that track.

Other than that, I’ve included tracks from a solid chunk of my good friends and collaborators, they know who they are. And I’ve included 3 out of the 4 tracks from my most recent EP ‘Isolate/Congregate’ which I released last month – given, the EP title is a little lazy, but it’s been a real reflection of my time spent indoors and what I’m looking forward to once we’re allowed to head out and experience live music again. It’s been a real momentary reflection, which I’m grateful for.

Biggest Influence on your music?

That’s kind of hard to answer, since influences are being thrown at you every single day in all aspects of your life… I dunno really. I guess playing the guitar and everything that’s previously come around with that. It’s still my principle songwriting tool, and I don’t think I’d be able to produce at the same level without it.

Young Fathers – Only God Knows, with the Leith Congregational Choir.

Bon Iver – 10 dEATh bREaST. I think most of my mates are completely sick to the teeth of me banging on about Bon Iver, but paired with the raw emotion of the songwriting, check the fucking bass in that track – unreal.

Dream person/s to collab with?

Again – Justin Vernon from Bon Iver. Or Kendrick Lamar in some capacity, that would be insane.

My ’72 reissue Fender Telecaster – it’s my ‘burning building’ item for sure.

Minus The Bear – Highly Refined Pirates. These guys broke up last year before I ever got the chance to see them, really wicked math rock band. Menos El Oso is one of my all-time favourite albums.

White Peach Records – they just have it nailed down to a fucking tee. Other than that, Banana Stand Sound are the family each and every time, it’s a lovely imprint to be a part of.

Salt & Vinegar Kettle Chips, and my favourite lockdown snack recently has been Akoori, which is a super-quick Indian-style scrambled egg dish – worth checking out.