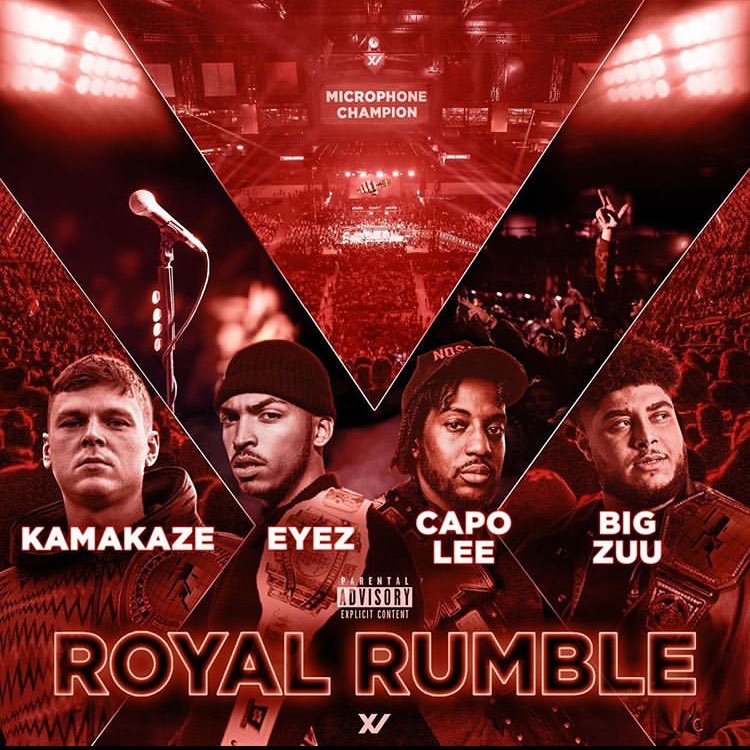 Instead, we’re treated to a project involving of the best lyricists in Grime today: Kamakaze, Eyez, Big Zuu & Capo Lee. The result us arguably the best release in Grime so far this year.

The four competitors in Royal Rumble can hold their own against anyone in the scene.

Introducing: Kamakaze, a lyrical wordsmith from Leicester who has the aggression to deliver on any riddim; Eyez, one of the midlands’ most recognisable mc voices with a distinct skippy flow; Capo Lee, don’t be fooled by the relaxed, nonchalant demeanor, the guy is a beast and has featured in some of the biggest Grime tracks in the last five years; Big Zuu, one of the more identifiable faces in Grime today with ferocious spitting style landing one-two knockout punches with his lyrics. Iron Mike? More like Iron Zuu.

Royal Rumble is more a celebration rather than an outright war, with fans of Grime being the real winners; here’s five reasons why Royal Rumble was exactly what we needed right now:

Gone are the days of Grime being ‘London-centric’; rather, it’s quite the opposite right now. Grime is one of the most diverse genres in UK music, with key voices and stakeholders in the scene situating from Scotland to the south coast. Royal Rumble is a great reflection what the Grime scene is today, a truly United Kingdom.

Swick and Craft 893 – a standing ovation is needed here. I’m going to say it – the production in Royal Rumble is the best I’ve heard this year in Grime. There’s something for everyone. Heavyweight bass riddims to skippy technical numbers. The juxtaposition of various sounds makes every track a must-listen; no skips allowed. Just when you think you know what to expect the next song takes you into a totally different direction.

The producers set the stage. The four MCs delivered an encore performance. The best part of this project is hearing four of the best MCs in the scene go at it – a lyrical battle we don’t often see in music anymore. Royal Rumble takes you back to the mid-noughties where 4 of your favourite MCs would jump on a record and give you countless reloadable highlights. The track 180 encapsulates this vibe – four MCs straight barring. Love to see it.

These multi-mc projects tend to elevate each artist; healthy competition I call it.  Listening to Royal Rumble makes you wish to be a fly in the wall while it was being recorded in the studio; it’s almost as if this was the intention of each MC as first video from the project, On Fire, is in fact a recording of all four in the studio. Great minds!

We previously talked about why Grime is not dead, and this release is the perfect response to that. Here are four MCs that live and breathe for the scene, creating organic innovative music that push the genre forward. Yes, Grime may not be the ‘in-thing’ right now; however, why should we complain when we have passionate MCs giving us exciting releases like Royal Rumble. The devotion of all four is inspiring. Listening to Zuustyle is a moment: The love for the scene, passion for mc’ing and dedication to be the best makes both this song and Big Zuu in general such an infectious listen.

Grime is in safe hands

Kamakaze, Big Zuu, Eyez and Capo Lee – the Grime class of 2015. They all came up and made their name at the same time. If Royal Rumble is anything to go by, 2020 will be the year all four are about to take the scene by storm and announce themselves as our leading bastions. The production, flair and creativity of Royal Rumble is class. Top class.

If these are the four who are about to be the faces of Grime, then the scene is in good hands.