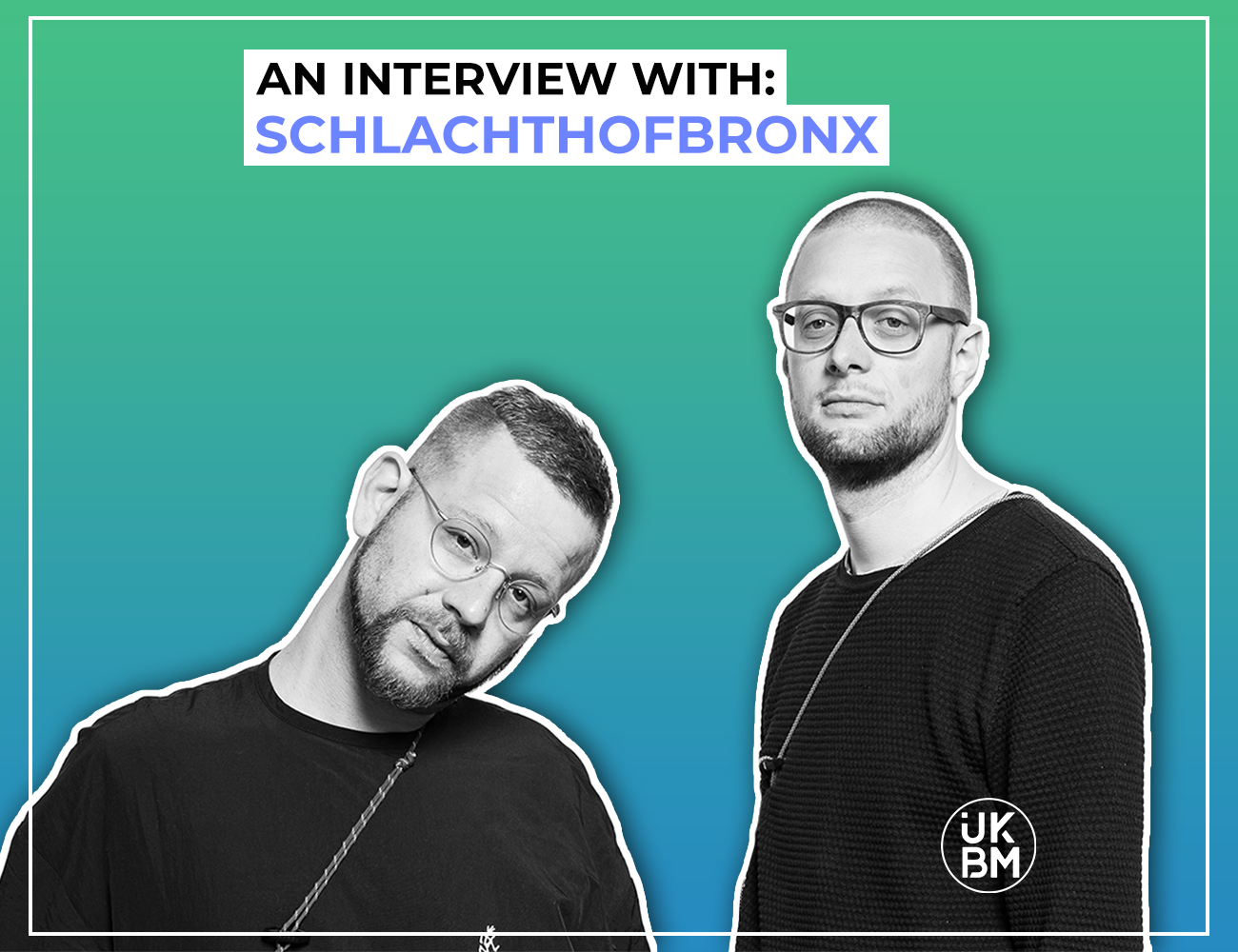 Born in 2008 with a love for all things sound system, Schlachthofbronx are the hugely talented production duo made up of of Jokob & Bene from Munich, Germany.

They have built up their name with a catalogue of genre-blending albums, EP’s and singles for over a decade, on labels such as Disko B, Man Recordings, Mad Decent as well as their own imprint, Rave and Romance.

Their label provides the home for their new single and latest release, the Soca influenced and very heavy Head Bad featuring Saint Lucian vocalist RG Skinny, a track which embodies what Schlachthofbronx do best, fuse the sounds of the Caribbean and sound system culture with bass heavy club music styles to create something high in energy, dynamism and quality.

We sat down with them to talk about the single, their influences and more.

We love your new upcoming release! Can you tell us how it came about and what it was like working with RG Skinny?

Thanks, glad to hear that! So yes, we’ve been following Soca and all its different strains since our beginning, and in the last years we got really into that Saint Lucia Kuduro-influenced stuff that became known as Dennery Segment. So we played these tunes in our sets on a regular, as we really absolutely love the whole vibe, the raw energy and sound aesthetics behind it. Naturally, we also reached out to some vocalists we like and exchanged beats and song sketches and now here we are with the first tune out of all this, Head Bad featuring RG. Skinny.

We love Skinny and his music since we discovered his GANG crew cut in 2016, which we absolutely riiinsed since then, finishing big festival sets with it, so we knew we needed him on a tune. Very glad he was into it! It took us a while to go through different versions of the tune and test it out live between Munich and Mumbai until we decided it’s finished. Fun fact – Toddla T already played a slightly different version of it on his radio show more than a year ago.

Are you able to explain your creative process when working together on making tracks? And has that changed much due to the events of 2020?

Well we always worked with other artists both virtually as well as in the studio. So we’re kind of used to it already, to just be able to exchange stuff online and talk & communicate a lot. Always much nicer to hang out for a few days when collaborating of course, but due to touring, and now Covid, that’s not always possible. Most important thing is you’re feeling each others music, the rest comes naturally or not sometimes, but then it’s best to not force it anyways.

"For us, it was always important to respect all the roots of the different music styles we hold so dear & get inspired from. So we think it’s essential to remind all listeners of this diverse heritage."

You’ve previously said that you like to remind people of the cross-pollination of different musical styles and that’s certainly clear in your approach to production. How important is it to you that you express yourself in this way and why?

For us, it was always important to respect all the roots of the different music styles we hold so dear & get inspired from. So we think it’s essential to remind all listeners of this diverse heritage, and also to show how so many styles are beautifully connected and intertwined. Especially if some people tend to forget just how much of all of the modern music we all love we just would not have without the queer and BIPOC community for example. For us, as we make a lot of music that is not easily pinned to one genre alone, we always love to discover stuff that connects the dots somehow, and often the hard-to-name territory in between strict genre formulas are the places where interesting new stuff happens.

For us it’s the perfect setting to present music we like and our own productions to people. it’s also one of the essential roots of what we are doing, from dubbing/remix culture starting with King Tubby to that community vibe and block party spirit that we love so much, that bass culture element, and obviously all that has developed or spun off of it, from Dancehall and Soca over Grime to Jungle and so much more. Plus gotta say we also absolutely love these other strains of sound system culture, from the whole Sonidero movement in Mexico to Baile Funk raves in Brazil.

In normal times we would now just have returned back from Notting Hill Carnival, our annual band holiday trip we take every year since more than 10 years. This year was obviously different, so we decided to at least honour that Carnival feeling and release our new single quickly after Carnival, to ease the pain a little and try to lift everybody’s mood.

"As we make a lot of music that is not easily pinned to one genre alone, we always love to discover stuff that connects the dots somehow, and often the hard-to-name territory in between strict genre formulas are the places where interesting new stuff happens."

Is there a sound system culture in Munich? Or the rest of Germany?

Yes there is some sounds and its gotten a lot bigger in the last years – we started the Blurred Vision project together with Elemental Wave, one of the biggest Dub sounds over here and also our long time friends. There are lots of other active sounds as well, in Munich and the rest of Germany. Going back and forth between the UK and Europe, it’s interesting to see all the similarities, but also big differences in the regional approaches to it, like what kind of music gets championed the most etc… for us the ideal parties are the ones where you play on a big system, but the lineup is hyper diverse, so you can hear & physically experience a whole range of styles and vibes over the whole evening, which is what we do on our Blurred Vision nights, always trying to bring a big variety of styles to the people on one night and on one sound system.

Are there any plans in the works for a new album?

Let’s see. There’s constantly a potential album in the making, but we also got sooo many other projects in the works that might surface in the next time…!

What track do you wish you’d made?
It’s time for the percolator.

Your dream collab would be with?
Rihanna or Irah. Or both on one track.

Favourite crisps?
Doesn’t really matter as long as you have some chocolate to pair it with, for a well balanced & healthy meal.

Head Bad featuring RG Skinny is out now and available to buy/stream right now via Bandcamp.