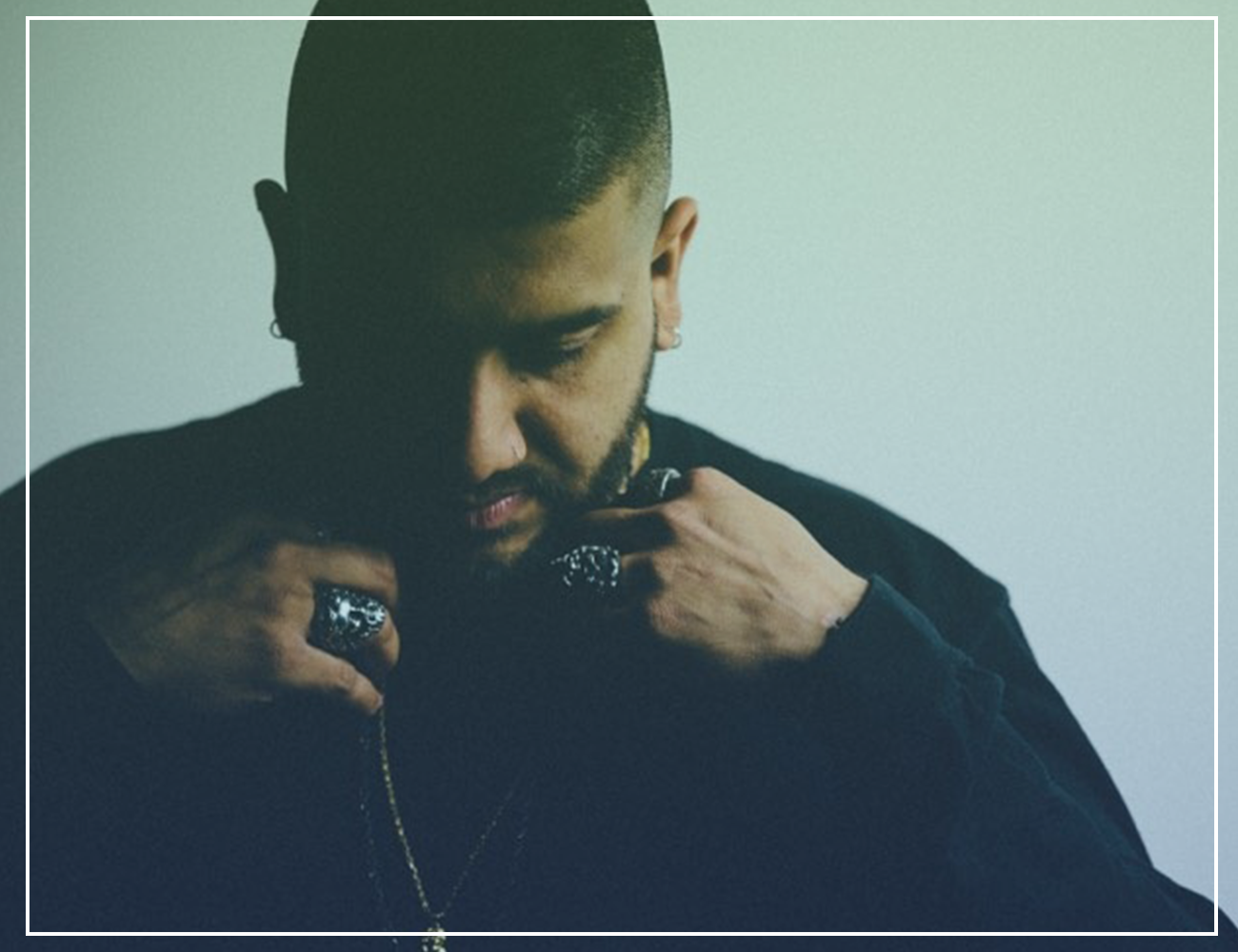 Yumna Black is a fast rising producer from Leicester who is eclectic in his range of bass encompassing music, whether he is making it or playing it in one of his sets. From vibrant and uplifting Garage, to soulful House and to grimey Drum & Bass. It’s all delivered with passion.

He has just released his latest track Hold It Down which features on the Avirex Airwaves 2 compilation on Wang Records alongside a whole host of UK talent.

We had the pleasure of talking to him about it as well as his career so far, working with Dread MC, his history with Beastwang, his Leicester hometown and its music scene, what he’s listening to at the moment and how he has kept busy during lockdown.

Hi man, thanks for talking with us. Your new track Hold It Down is out on Wang Records now and features on the Avirex Airwaves compilation, can you tell us a bit about the track and it’s creation?

Hey! When I was making the track, I was going for a dark intimate underground feel but as it started to grow it became this real upbeat groovy vibe. Hold It Down was initially meant to be an interlude track as I’ve always loved interlude tracks on albums, but as I played it out more, I felt like it needed to be longer hence the DJ version compared to the streaming version.

Hold It Down has been played by the likes of Toddla T, The Blessed Madonna and Gardna. Are you pleased with the reaction it’s got so far?

Absolutely! It was a massive milestone for me, especially that I have only been releasing music for a year. It’s something different to what I normally make, so the reaction from it has been amazing. Also getting played on BBC Radio 1, it’s like whaaaaaaat?!

How did you hook up with Wang Records and Beastwang in the first place?

I’ve been DJing at Beastwang since 2013, then became a resident in 2016. From there I started getting attached to the brand and became good friends with Nico (Founder) which then led me to be a part of the main team in 2017 and now we’re like family. Having a record label has always been something that we’ve wanted to explore, so naturally when the whole team was making music it felt like that right time.

What has been the best event that Beastwang has put on that you’ve played at?

I can’t name one event, for me there were two events that really were different and stood out to me. The energy, the vibe, the music was at a high and never came down. The first was an Outlook launch party with DJ Q and the second was an event with DJ Oneman.

How was the experience of working with Dread MC on Ain’t No Chance and how did that come about?

I’ve been listening to Dread since I got into underground dance music. I’ve even got some old Rinse FM sets where he used to host Redlight’s show. Dread put up a clip on his Instagram of a vocal that he was giving out, I hit him up for it and I just wanted to mess about with not really having an idea in my head. Some weeks went on and I had a garage beat under his vocal, I never heard him on a garage track before either, so i was pleased with the outcome and sent it back to him and Nico and they both loved it. Working with him was amazing, I would love to make some more music with him in the future.

Who else would you love to work with in the future?

Redlight has always been one person on my list. Four Tet, Kaytranada, Joy Oribison would all be amazing to work with too. My palette of music is very versatile, so it ranges all over genres.

Have you been working on any new music during the lockdown that you can tell us about?

Currently I’ve been working on a release which i’m really excited about with our host/mc from Beastwang events, Kurly. This should be out in the next couple of weeks. His energy is so vibrant and on a stage it’s amazing, I can’t wait for you all to hear this track.

How else have you been keeping busy during these strange times?

This lockdown has been quite a blessing for me. It helped me concentrate on myself and gave me time to delve into mindfulness. This helped me to stay positive through everything that was going on in the world. If anyone wants to know more on what I read and podcasts I listened to my inbox is open.

As someone who is Leicester born and bred, what effect do you think this extended local lockdown will have on the city and it’s nightlife?

It could have a big impact on the smaller companies, which I hope doesn’t affect them too much. It would be amazing if this time really lets people focus on the opportunities and be more creative with the companies. As I feel though the nightlife did really go downhill.

What are you most looking forward to when the lockdown ends?

Having some cocktails and eating out at some amazing restaurants, being social and definitely getting back into a rave!!

What are your favourite music venues and clubs in the city? I used to live in Leicester and loved venues like Superfly, The Music Cafe and Sophbeck.

There is one venue that I’ll never forget, we’ve done a couple of outdoor events there and hands down one of the best in the UK. Its run down now and the council are saying its too dangerous to put on events there.

What are your other favourite spots in Leicester (record shops, bars, food places etc) you could recommend for us to check out when things get back to normal?

In February, we just opened a new cocktail bar in the city centre called “Sophy.” (Formally known as Sophbeck). You definitely need to check it out, come down and drinks are on me haha! Another bar I would recommend is Brick & Beam the aesthetic is bloody gorgeous. I would recommend Crafty Burger and Kai, I always go there to get food!

Who are your biggest influences as a musician?

If I had to name a couple it would be Pharrell, Disclosure and Bonobo. They all range from one side of the scale to the other and they bang!

Your DJ sets encompass everything from House and Garage to Grime and Drum & Bass. Do you always want to cover everything that brings the energy to the dance floor when you play?

When I first started to DJ, it was at weddings. I’ve always been a party DJ which comes natural to me, this is why I range through all genres. I never intend on doing it all the time, I’ll always feed off the crowd. More recently I have been sticking around the House & Garage range.

What’s the best set that you’ve ever played?

It’s got to be the Outlook Launch party night with DJ Q down in Sophbeck. Sophbeck was Leicester’s best underground venue. Basement, low ceiling, 150 people, weighty soundsystem… you get where i’m going right? It’s also what got me into becoming a resident DJ with Beastwang.

What’s the best rave you’ve been to, either playing at or as a punter?

I went to Outlook Festival back in 2012. The Swamp 81 stage with DJ Oneman. Changed my life. It’s been a dream of mine to play at The Moat Stage, now that they’ve changed venues I don’t think this can happen. Also I went to Gottwood in 2017 and I loved it. It’s an amazing festival, the vibes and aesthetic of it is definitely one to be missed.

Who from the Leicester scene at the moment could you recommend for us to check out?

Our whole team, the music that the gang is sitting on blows my mind, it’s so so good!

Was the electronic music legacy of Leicester labels like Formation an influence on you and your music?

I was very young when Formation was about, so I never really got to see it in full swing. I can only imagine how great it was.

What music are you currently listening to too and enjoying?

The whole Beastwang Free Downloads, there is some amazing music there. Also the ending of Ego Death by Ty Dolla Sign… Jheeeeez gets me gassed!

What have been the biggest tracks of the year so far for you?

I’ve been rinsing Jayda G – Both of Us and DJ Boring – Like Water. Clipz – Again and Sammy Virji’s Album!

What have been some of the biggest moments of your music career so far?

One of the highlights would have to be putting on a 2,300 cap rave when we booked Chase and Status, it was such an achievement for all of us. Another one would have to be being played on one of the biggest radio station BBC Radio 1.