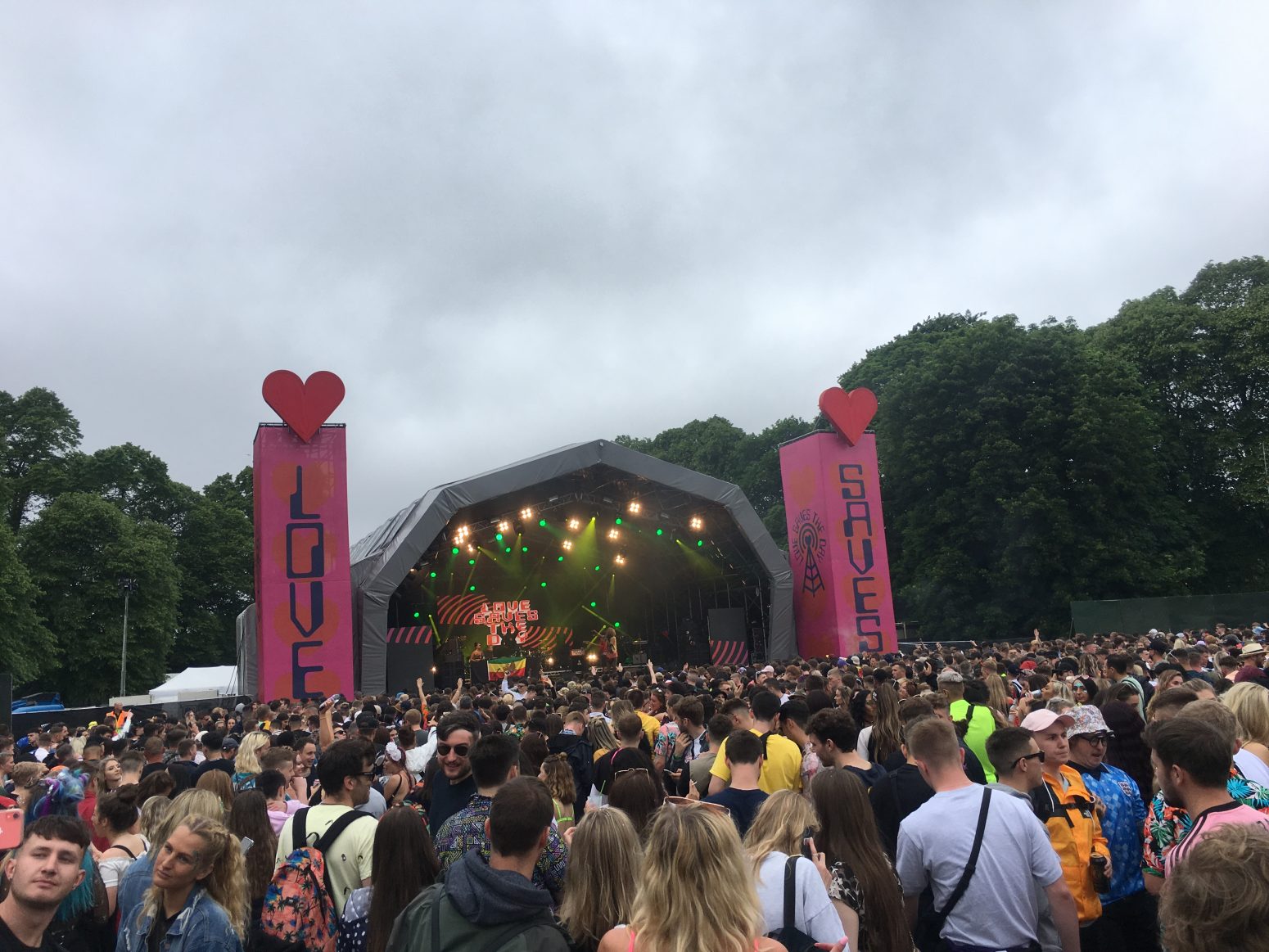 With a whole host of performances to look forward to, we headed to Eastville Park for the Sunday’s festivities and the entire day did not disappoint one bit. Upon arrival, we are treated to classic British weather in the form of a bit of a downpour but the weather didn’t dampen anyone’s spirits one bit and throughout the day, the weather just got better and better adding to the extremely good natured vibe of the event.

The day kicks off with 24 Hour Garage Girls blasting the growing masses with a selection of garage, grime and bassline smashes on the main stage with the likes of Thats Not Me and Boasty given refixes to the delight of the Up for it crowd and it doesn’t matter that its only 1pm, the crowd at Love Saves The Day are here to party. We leave the main stage to check out Midland on the centre stage who delights the audience with his techno laced house.

After being enticed by Midland, it is back to the main stage where Congo Natty and his live band The Rezistance bring the fire to Eastville Park. Coming onstage to a string of Bob Marley classics, the stirring reggae is swiftly swapped for some more high octane fare with a string of anthems such as Benny Ls Remix Of John Holts Police In Helicopter being dropped with a rousing cry if “If you’re a junglist, make some noise” before Congo Natty, his band and a series of guests including Nancy and Phoebe bring some blissed out vibes to Love Saves The Day.

The high energy returns at the finale of the set with a shout-out to the sadly departed Congo Natty peer Tenor Fly followed by a roar from the crowd and a mass showing of energy as Pendulums Tarantula is dropped and the audience goes mental.

Following Congo Nattys triumphant set, we catch a section of Josey Rebelles set at the centre stage which mixes an inspiring mix of sounds culminating in Revelle dropping the classic Sweet Harmony by Liquid.

Back to the main stage and Ocean Wisdom demonstrates exactly why he is one of the country’s most impressive performers with an awe inspiring demonstration of his skills. Mixing up tracks from his latest album Wizville with older material like Walkin, he has the crowd in the palm of his hand from the off and blows their heads off with an awesome display that shows off his vivid flow to the max. The highlight has to be Zocean dropping a rawkus version of Ting Dun that sees the crowd erupt and as he finishes it’s safe to say that anyone watching who wasn’t a fan if his before has been firmly converted and those who already knew, were blown away once more.

At the Lonely Hearts stage, bassline hero Notion gets the crowd going with just as the sun comes up before Lady Leshurr smashes the stage to bits with a highly energetic performance.

Coming onstage and hyping the crowd up to the sounds of hip hop classics Still DRE and Sound Of Da Police, Lady Leshurr proceeds to mix up grime, reggae, pop and a whole host of bits in between with ease to whip everyone up into a frenzy with closer Brush Your Teeth gaining the biggest reaction of her set.

Following Lady Leshurr is no mean feat but Friction is more than up to the task as he lays down a series of d&b killers from the get go before it’s off to the Lost Gardens to see more drum & bass royalty in the form of a special b2b set from Randall and Breakage.

This is definitely, not only one of the most highly anticipated sets of the day, but one that turns out to be every bit as legendary as was hoped for and will undoubtedly live long in the memory of those who witnessed it.

Mixing up a whole load of anthems, classics and a few surprises, the ease of which they did so was awe inspiring and the heaving crowd responded in kind as they danced from start to finish. With SP:MC on mic duties, the trio gave a lesson in pure drum & bass.

Following that special set was Gutterfunk mainman DJ Die and the inimitable Inja who continued the party and raised the energy levels as high as they could get with a thunderous set that took in classics from Bristol and way beyond.

As well as catching bits of brilliant sets on the Brouhaha stage by Children Of Zeus And Levelz, both repping Manchester to the fullest and both on top of their game with soulful and rabble rousing sets respectively, it was time to head to the main stage for the finale and to see Chase & Status bringing their highly anticipated Return II Jungle spectacular to Love Saves The Day.

Jungle originals Brockie and Det got things off to the best possible start with a set that spanned the entire history of jungle music and whipped the crowd into a frenzy as they dropped banger after banger before General Levy took to the stage and tore into Incredible to send the crowd into raptures.

Headliners Chase & Status then took over to highlight their Return II Jungle project and proceeded to bring the same level of vivacity and fire with a mixture of classics and material from the new album ably assisted by special guests Skibadee and Shabba as well as Rage and they got the crowd to bring it in fine style as they smashed through this closing set as if their life’s depended on it and their headliner status was well earned with this memorable performance that closed Love Saves The Day in amazing fashion and ensured that everyone watching and dancing was given the send off from the festival they deserved.

With great vibes from start to finish and a stellar set of performances, this years Love Saves The Day was a total blast and next year can’t come around soon enough!