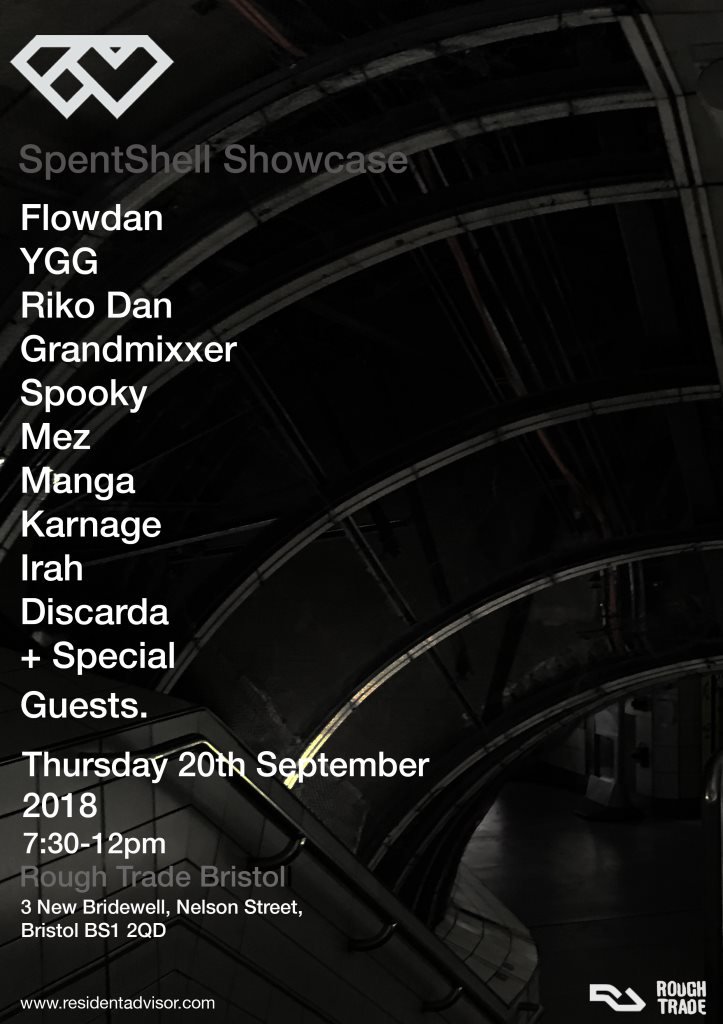 To celebrate the start of its life as a new label and to demonstrate exactly what the label is about, SpentShell took to the road to show the UK exactly what grime in a live environment is like and to show off a multitude of talent both seasoned and new.

The lucky fans who witnessed the three shows in Bristol, Nottingham and London were treated to some of the most exciting and energetic music that grime has to offer and it will be something that they will definitely not forget in a hurry. We caught the first shhow in Bristol and from start to finish it was a lesson in raw energy, the vibes were unreal all night and it’s safe to say that the present and the future of grime (as well as a respect for what has gone on in the past) are being handled with ease and style by the SpentShell crew.

As the idea of these shows was to showcase that powerful underground grime feeling, it was perfect that the show was in the intimate Rough Trade venue, a room with a cracking soundsystem that allowed the artists onstage to give off so much power and that combined with the energy from the crowd, it was a sure fire recipe for success.

Kicking off the night was Bristols finest Jay0117, who ensured that the night got off to an explosive start. With Sir Hiss detonating the riddims behind him and with an array of capable MCs alongside him including the talented Dimpson, Jay0117 showed exactly why he is leading the charge when it comes to grime in Bristol, and performing in their home city saw the crew perform a set that ramped up the energy levels early on with Jay0117 in particular a furious ball of enthusiasm as he spat his bars (especially when he flowed over Topper Top), bigging up Bristol and generally hyping the crowd up with ease. Sir Hiss also did Bristol proud with an inspiring selection of beats that brought out the best in the assembled MCs throughout, kept the crowd skanking continuously and showed what a talent he is with the audience responding in kind.

Following such a performance is an envious task but SpentShell soldiers YGG who followed expanded on the vibe that had already been built and brought their own vivacity to the night. Performing songs such as Strikers and the smoother but still raw Turn Up, the groups members PK, Saint and Lyrical Strally along with DJ Travis T showed a grime crew who not only have the talent and the songs but also the fact that they can really bring it in a live environment such was their stagecraft and the way they worked the crowd (it was spinetingling levels of energy when they spat over the Pow beat!) This is a group who repped SpentShell to the fullest and who completely blew the roof off the venue and performed with the aura of artists who were in complete control of what they were doing, in a way that belies their young ages. The future of grime has to be YGG for sure and it couldn’t be in a safer pair of hands.

Manga followed and showed off tracks from his latest release Outsiders Live Forever (his EP with Sir Hiss) with the versatility and experience of the pro he is and showed exactly what an exciting MC he is live, spitting like his life depended on it and spitting bars both old and new to the delight of the hyped up crowd.

Manga was joined onstage by Karnage, Irah, Discarda and Riko Dan and the energy levels were ramped up even further and they kept on getting ramped up as they classics kept on coming. Irah demonstrated just how deadly a microphone champion he is with his formidable flow as Karnage kept the riddims coming continuously. Discarda showed his lyrical clout with his energetic bars and Riko Dan just took complete control and showed exactly why he is one the best to ever do this and had the crowd eating out the palm of his hand consistently. The energy levels as this was unfolding were unreal and even when it seemed like they had peaked, they would be raised up time and time again!

As the energy levels rose and if that array of legendary talent wasn’t enough (and it would have been!) they certainly exploded again when SpentShell mainman, Flowdan took to the stage, the vibe was just out of control and things were taken to another level. It was a sheer joy witnessing all these legends of grime trading bars and hyping each other and especially the rabid crowd up so much. This is an artist who has been there from the start and not only that but one who just keeps on getting better and better and someone who I will never get tired of spitting his hard as nails bars with vigour. Nobody does it with as much authority as Flowdan and with SpentShell and this army of talent on this form, it’s going to go from strength to strength for grime, big things are happening, no doubt about that!

Highlights of the night were so many, it is difficult to single one or indeed many out (for starters though, Sir Hiss going b2b with Karnage felt historic and hearing the Cha beat played out was a personal one) but the main thing overall is that the whole night was a highlight for grime with everyone involved giving their absolute all throughout and seeing and hearing these MCs trade bars live over iconic beats is something that will live long in the memory. The only slight minus point to the night, if there has to be one, was the fact that not all of the billed artists could make it (I was especially looking forward to seeing Spooky) but everyone who performed more than made up for it with the fire in their performances and with any luck, there’ll be more like this coming up in the future.

Despite its many incarnations, it’s always been the raw, energetic and back to basics live nature of grime that cannot be topped in my opinion and nights like this encapsulate the excitement and vivacity of grime in its natural environment, the talent on display was inspiring and SpentShell couldn’t have hoped for a better start to their live shows.