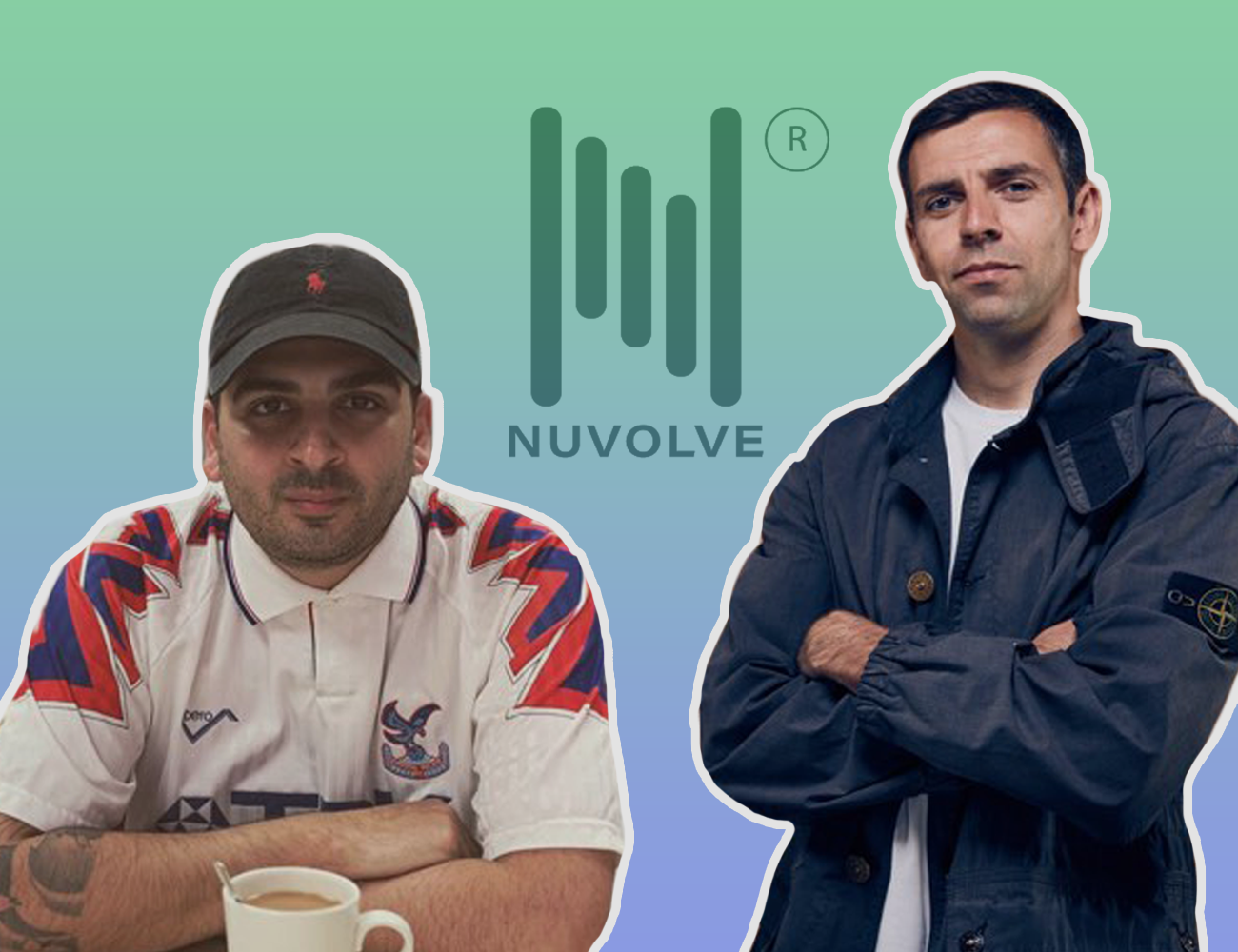 In the second part of our look at Nuvolve Records, we talk to Smasher and Smokey Bubblin’ B about Nuvolve and how it feels to be realising their music on the label as well as what music they have coming in the future, what UKG means to them, career highlights and their recent b2b on Hatcha’s recent fundraiser.

How does it feel to be involved in making music for Nuvolve?

Was great when the guys approached me about releasing on the label, having the backing of EZ is powerful for a Garage head like me

2021 I have been very busy, I’m currently on my 12th release this year via my own label “On Top Records” I’ve just dropped my 3rd single “Them Days” ft Local from my forthcoming album “Vibes In Motion”, got some bookings in the diary so looking forward to getting out and performing live too.

He’s a national treasure, He was the first DJ that made me wanna pick up a pair of headphones and learn to mix, his contribution to UK Garage will go down in history.

A tuff one…. Todd Edwards – Saved My Life

What was your introduction to UK garage and Bass music in the first place?

Pirate radio and tapes played a big part in me gravitating towards underground music. My first taster was via a Todd Edwards – Inside The Mix CD released via Locked On Records. From there that got me hooked, then lead me down the path of collecting records and wanting to be a DJ.

I’m constantly trying to evolve and move forward with production. In order for this genre to evolve, it has to embrace new things

You released Calling on Nuvolve at the end of last year. What has the response to that track been like?

It’s been solid, I’m very happy the track came out as it was only made a few weeks prior to Nuvolve approaching me.

Have you got plans for a follow up on Nuvolve?

If the opportunity was to present itself, absolutely.

What other music are you working on that you can tell us about?

The new album “Vibes In Motion” is what I’m excited to share next. I’ve been working solidly for just under a year and I’m very proud of it.

You have had a prolific year so far with releases like Dis One, Dubplate and Locked In Locked On. Do you want to get as much music out as you can?

Yeah absolutely, i’ve had to learn to let go over the past 6 months but in doing so my output has been very high, i’m always creating i feel things are moving at such a fast speed so it’s important to release and not sit on the music.

Has the lockdown period been a chance to make more music than you maybe wouldn’t have done before?

What the lockdown done for me was forced my hand to build a home studio and in doing so has had many positives for me, I’ve always been very self sufficient, I can’t think of a time over the past 10+ years I haven’t had my own space to create, being at home now the family see me a lot more so everyone is happy.

Who do you credit as the most important influence on your music?

You’ve just done a set with Smokey Bubblin B’ for DJ Hatcha’s fundraiser for Mind. How did that set go and what were the highlights of the event for you?

The set was absolute vibes !! The highlight was simply taking part, Hatcha and the phase transition team did amazing to get that line up together and to raise over 12k for a charity like mind, it really was a great day and everyone was on top form.

Are you looking forward to playing out live again and what have you missed most about that?

I can’t wait. Bookings have been coming in so its fingers crossed now that we can get back out there and do what we love. I’ve missed mainly the interaction. I’ve done my fair share of live streams now and i’m done! I want to be in a rave so you can feel the vibes.

What have been some of the most memorable moments of your career in music so far?

Wow, there’s been quite a few, one that sticks out was DJing for Klashnekoff at Hip Hop Kemp Festival in Prague. It was the first time we had both performed abroad and basically, his DJ at the time Skully, couldn’t do the gig so I stepped in super last minute.com. I remember walking on stage and as far back as i could see there were people and I didn’t even know the set list running order (at this point DJ has panic attack!) got some great memories.

How does it feel to be involved in making music for Nuvolve?

It’s a great feeling when you see the kind of talent and records they are working with and to be included in that is very special for me. You could see the intent that Nuvolve had with its first few releases.

I’ve been working on so much music I can’t wait to get it all out there, but getting back into club/festival land is what I’m most looking forward to and testing out some of these new bits, I find I get most of my inspiration in raves and on the fields.

EZ has been a huge inspiration for me, from his Pure Garage compilations to his own productions and as a long time supporter of my productions I can’t thank him enough

I have 2, 24 Hour Experience – Together & Double 99 – Rip Groove in my opinion they ARE Garage music, the blueprint.

What was your introduction to UK garage and Bass music in the first place?

It was on Kiss FM in the late 90’s when I was just a kid, I used to listen to Paul ‘Trouble’ Anderson, he played soulful House & US Garage but dropped a few UK productions in his mixes. When i started record shopping id buy tape packs too and the love grew from there

To as many ears as I possibly can. I feel with every production, I get that little bit better, every day in the studio is a school day. It’s so sick how many people in all these different places are into this sound, it’s only going to grow.

How has your debut for Nuvolve, Tell U been reviewed so far?

Really well, DJ’s from different genres were supporting it too which was fantastic & unexpected. DJ’s from Garage, Bass all the way to the Tech House DJ’s were playing ‘Tell U’ It got shown a lot of love on BBC Radio 1, 1xtra, Kiss & Rinse to name but a few.

What is next for you and Nuvolve?

We haven’t got anything penned in at the moment but we will defo be working together in the future, I love the whole ethos of the label & the whole team are fantastic as well.

What other music are you working on at the moment that you can tell us about?

I’m involved with some really exciting projects at the moment including some sick collabs which I’m really excited for everyone to hear. I’ve also been making a lot of dubs & edits getting ready to get back in the dance, so there is still plenty more to come!

Have you got any plans to put out more jungle releases like Elysium/Special that you released in April?

Defo! Had so much fun making it, I’ve got a collab in the works as well as my own productions. The lockdown has certainly given me more time to experiment.

What is it about Bass music, be it Jungle, Garage and beyond that you love so much and what makes it special to you?

For me it’s just the rawness of it all, I love how rough and ready it all is, it has so much character & energy

How was the experience of doing a B2B with Smasher for DJ Hatchas Mind fundraiser?

That was so much fun! Need to big up Hatcha for a fantastic well put together stream for such a worthy cause! We said prior that we would play our own productions to show people what we have been working on and it was just vibes for days.

Who have you loved collaborating with in the past and who would you love to work with in the future?

I think my fave was probably when myself & Hatcha remixed Audio Bullys for Simma Black. The energy in the studio was so good. But I’ve loved working with everyone I’ve collab’d with. Moving forward I’d like to collab with Redlight, he’s one of my fave producers.

Are you looking forward to playing in clubs and festivals again and what do you think that the vibe will be like from the off?

I can’t wait! Especially to hear some of these new productions on big systems. I think the vibe will be brilliant, we’ve missed our night/festival life so much. I think the appreciation for it will be bigger than ever.

What have been some of the highlights from your shows on Rinse FM?

Every single guest has been a highlight, I can’t thank them enough! But AC Slater from Night Bass has to be up there. Also, I have to thank Rinse for keeping things going and being able to give me some kind of musical release through this whole thing has been a godsend

What have been some of the highlights of your career so far?

Playing back 2 back with Matt Jam @ EE to a full Switch Yard was pretty special, i also remixed DJ Zinc & Maverick Sabre last year in terms of production for me that was a massive highlight. I have so many though but I’m looking forward to making so many more!