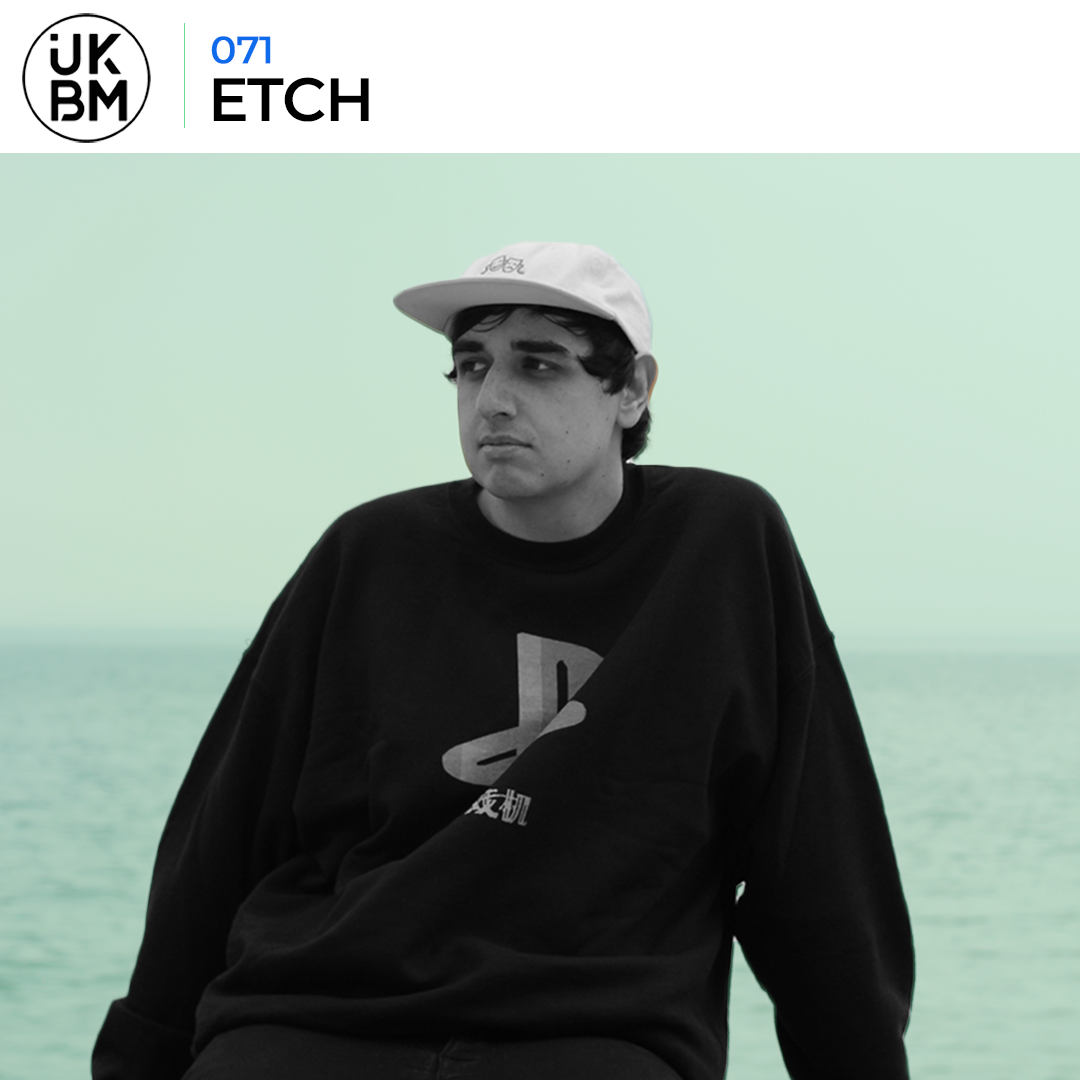 Unbound by genre and reflecting the entire spectrum of the hardcore continuum, producer Etch has been making serious waves with his innovate, raw and bass driven productions for years now.

The Brighton-based artist has been putting out records since 2013, announcing himself on the scene with his hugely well received Old School Methods EP on Keysound Recordings. Since then his music has been pressed and pushed by the labels such as Wisdom Teeth, Soundman Chronicles, Sneaker Social Club and many more including his own Bun The Grid imprint with fellow producer Bulu.

His latest offerings come in the form of his third album Strange Days on Seagrave, which we featured here, and his brand new Polarity EP on the highly regarded German label Ilian Tape, which you can pre-order here.

Now he steps up for our latest UKBMix and what a mix it is. Much like his productions, he refuses to stick to one genre, effortlessly moving between styles, moods and structures.

We caught up with Etch for a chat. Talking about his UKBMix, he said, “This mix is straight off the dome this time – no pre-thought. Perhaps something I would play in a club for people who wanted to hear. Most of the tracks are either unreleased or have just come out. Also a fairly wide variety of styles, i kinda have ADHD when it comes to mixing, I can’t play too much of the same thing, the same rhythm and sound too long, i end up getting bored unless its for a proper dedicated genre type thing.”

Biggest influence on your music?
Too hard to say. I’m pretty absorbent of anything creative or pleasing to the senses. Films, videogames, Photography. Something that always lingers is retro futurism and Chris Cunningham music videos. I’m also influenced by all my friends and people I meet. I often try to sonically re-create peoples personalities and traits in my own weird little way. Also creating a sonic landscape for places i’ve never been or half remember being at. In terms of music that influences me… I wouldn’t want to take up like 2 paragraphs! I love A LOT of music and it all really rewires my brain and goes through me like a blender when it comes to the construct of my own music.

Last track you listened to?
Maybe unexpected but Sky Ferreira – Downhill Lullaby. I think Sky has had it a bit hard with the music industry and seems like someone who is incredibly creative and has great musical and visual ideas, but this track really took me off my feet. She’s somewhere between the soundtrack of a David Lynch film and an old Post-Punk/New-Wave artist on this track. It’s very dark and deep and really makes me think of bands like Siouxsie & The Banshees, The Cure, Joy Division etc.

What track do you wish you’d made?
Time and time again, Photek – Ni Ten Ichi Ryu. Or on the more obscure side of things, Polar – Mind Of A Killer..and just anything Martin Hannett had a hand in producing.

Your dream collab would be with?
Really hard question because I am a shit collaborator. The amount of times I’ve been like “YEAH OK THIS IS THE YEAR” then get stems off people, then get like halfway through doing something, then get either distracted by something I’m doing or second guess myself too much and get too anxious that the other person will be like “wtf has he done”. I’m quite shy and unbecoming when it comes to my music, I just like working alone really, I have to change this for sure. Vocalists and MC’s are a different story. So in that sense I guess i’d love to work with either Kool Keith or Lana Del Rey. Would also love to work with Danny Breaks but I know i’d just crumble at his feet, same goes for Luke Vibert.

Favourite piece of music kit?
I’m not a huge KIT person – but I do very much enjoy processing things through my hand-me-down EMU6400 and old Mackie 8-track I got off Toasty, it makes stuff sound really warm and brutish. I also recently got the Behringer TD-3 which is a replica of the TB-303, it’s very very very fun, i’ve made a bunch of tracks with it, one of which is in this mix, I’m sure everyone will figure out which one that is! If we are talking inside the computer, Reaktor til I die. Reaktor & FM8 are things I rarely actually go outside of these days, they can just do anything.

Last album you listened to start to finish?
Pa Salieu’s most recent mixtape ‘Send Them To Coventry’. I’ve had my eye on him since ‘Frontline’ dropped. He’s absolutely incredible, easily one of my fave UK MC’s right now. Flawless production &  incredible vocal delivery sets him apart from a lot of stuff which is becoming very very samey in that kinda field. I really need to jam the new Megan Thee Stallion album as well, I hear it’s amazing and I love her.

Favourite record label?
Of all time it’d have to either be Moving Shadow or Mo’ Wax. Sorry I’m never giving a definitive answer!

Favourite crisps?
Easily the hardest question. I am somewhat of a crisp chaser, i’m always on the lookout for new and interesting things. Recently I got these crisps called Trinidad Scorpion Sea Crisps. I absolutely love spicy food, like I almost get off on the pain! These are the only crisps I’ve eaten that have resulted in eyes watering and water 100% needed during consumption. They are amazing and taste good too, it’s not all pain.