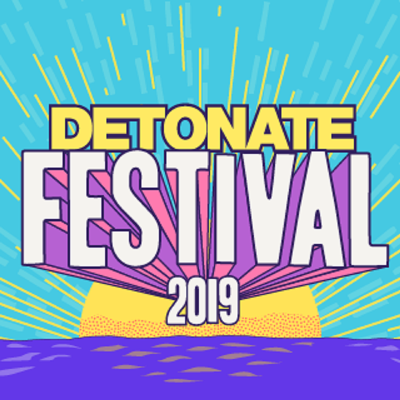 Detonate have been putting on stellar events for the past twenty years featuring the cream of the crop of artists from drum & bass, hip hop, dubstep, breaks and much more. From monthly nights at venues such as Beatroot, The Bomb, Stealth and the Rescue Rooms to the Rock City all-nighters and the legendary Indoor Festivals, everyone from Goldie, Roots Manuva, Kano and the RZA To Digital Mystikz, LTJ Bukem, DJ Hype and Hudson Mohawke And so, so many more have represented at Detonate.

With 2019 being the twentieth year of putting on events, this year festival featured a stacked line up of not to be missed acts and what better way to celebrate their twentieth anniversary than with a massive party in the park!

While they have put on events at various venues across the country and beyond, Nottingham is where Detonate calls home and for the past 5 years, they have held the Detonate Festival in a massive park just outside the city centre, and this year was no exception, only this time the event was bigger with the prospect a massive new stage adding to the anticipation and acts like Andy C, Wilkinson and Shy FX topped the bill and made for an event not to be missed,

As this is Britain though, the weather on the day of the event was less than perfect but it definitely wasn’t going to dampen the spirits of the thousands of festival goers who came from all across the country to rave with the Detonate crew.

Arriving into the picturesque but damp surroundings of Colwick Park, it was straight to the Big Top stage which was hosting a stellar lineup of and a great place to take shelter from the rain, although. even if it had been blazing sunshine, this would still have been the destination for a large portion of the day, such was the strength of the artists playing on the stage.

First up on the stage was J:Daure who despite the early (11am!) start got the early arrivals hyped up with an energetic set that set the tone for the day off nicely and as he ended his set with Chase & Status’ Streetlife, he was swiftly followed by Detonate mainman Transit Mafia who kept the energy levels high as the tent started filling up more and more with a wide ranging selection of d&b bangers.

Up next was the legendary Breakage who delighted the crowd (by this point, the tent was heaving with the raving massive) with tunes new and classic and when he dropped the M Beat and Nazlyn Remix of Sweet Love, the euphoric vibes went higher and higher, and he proved once again why he is thought of so highly in the drum & bass world with a faultless selection.

After Breakage, it was time to explore the rest of the festival and seeing as the one and only David Rodigan was rocking the main stage, it seemed like the perfect time to soak up some reggae and dancehall classics with the main man himself and he did his very best to bring the sunshine to Nottingham despite the darkened skies. Dropping classics like Bennie Mans Who Am I (Sim Simma) and Protojes Who Knows, Rodigan was ever the consummate hypeman declaring that “The rain can’t stop me” and “Bass, the final frontier” with a contagious passion and he succeeded in bringing a touch of sunnier climes to Colwick Park.

After an explore around the site, including a stop at the impressive new Elysian Fields stage, it was back to the Big Top to see Benny L rip it up, making the crowd go nuts as he dropped each track, culminating in him dropping Original Nuttah to the crowds utter delight before the inimitable S.P.Y brought his Dubplate Style to Detonate and the energy levels just got bigger and bigger. The vibes in the Big Top from start to finish were immense with the ravers in the crowd bouncing from the energy from the stage and as S.P.Y hit the crowd with his dubplates including a killer Roni Size cut, the crowd were having the time of their lives.

After S.P.Y finished, it was time to see a true master at work in the form of Andy C at the Elysian Fields, stopping en route to check out an orchestral rendition of Dr Dres 2001 album, which was performed with DJs, MCs and of course an orchestra delivering the albums cuts with style at The Clearing.

At the Elysian Fields, from start to finish Andy C absolutely smashed his set that took in all areas from the d&b spectrum. With Tonn Piper on the mic, the vibes were unreal as he drew a huge crowd who danced as if their lives depended on it. Anthems like Pendulums Tarantula and a remix of Ram Trilogy’s Titan were dropped alongside newer cuts like Digitals Deadline and Retreat by Chase & Status and Cutty Ranks and the crowd reacted the same each time, with an energy that was returned in kind from the stage with Tonn Piper hyping up the crowd admits some giant flames. The set ended with some Prodigy as a tribute to Keith Flint and this rounded off a phenomenal set.

As the unmistakable sounds of Topper Top rained down from the speakers and gave way to waves of throbbing bass, it was time for Dub Police mainman Caspa to make a a long awaited return as he followed on the stage with a set jam packed full of dubstep anthems with his own Rat A Tat Tat and Breakage and Newham Generals Hard, being particular highlights. It was great to hear some of those tracks live again, and they still sound fresh and with the audience skanking in appreciation, it was apparent that Caspa is still a big deal for the Detonate crowd.

Back to the Big Top, Dimension kept the energy high with a solid set (always great to hear Raver played out) as the crowd kept going before Friction took to the stage with Linguistics and gave a lesson in how to rock a crowd with some serious anthems, deftly delivered and the crowd lapped it up and there was a real sense of euphoria in the tent.

As we bid farewell to a brilliant time in the Big Top, it was off to the Clearing to finish off an excellent day with a couple of well anticipated sets. Shy FX didn’t disappoint at all with a crowd pleasing set that combined drum & bass and jungle with a varied selection of bangers. Hearing him drop Giggs Talkin Da Hardest was immense as was hearing him drop Original Nuttah which sent the crowd wild and the whole set saw the entire field dancing manically from start to finish.

Headliner Wilkinson came onstage to a heroes welcome and proceeded to cement his status as a headliner with a massive set of euphoric drum & bass that saw him playing classics like Circles and Mr Happy alongside new anthems like Urbandawns version of Come Together and the crowd responded in style and this created a brilliant atmosphere and as he wrapped up his set, the only way he could, with Afterglow, the vibe grew bigger and bigger as fireworks lit up the sky and the festival ended in perfect fashion and proved that Wilkinson is a deserved festival headliner.

Detonate Festival 2019 was a brilliant day and a brilliant way to celebrate Detonates twentieth birthday. Having been to so many events that they have out on over the years, this years Festival was right up there with the best with some unreal vibes throughout the day. Roll on next years event and here’s to the next twenty years of Detonate!