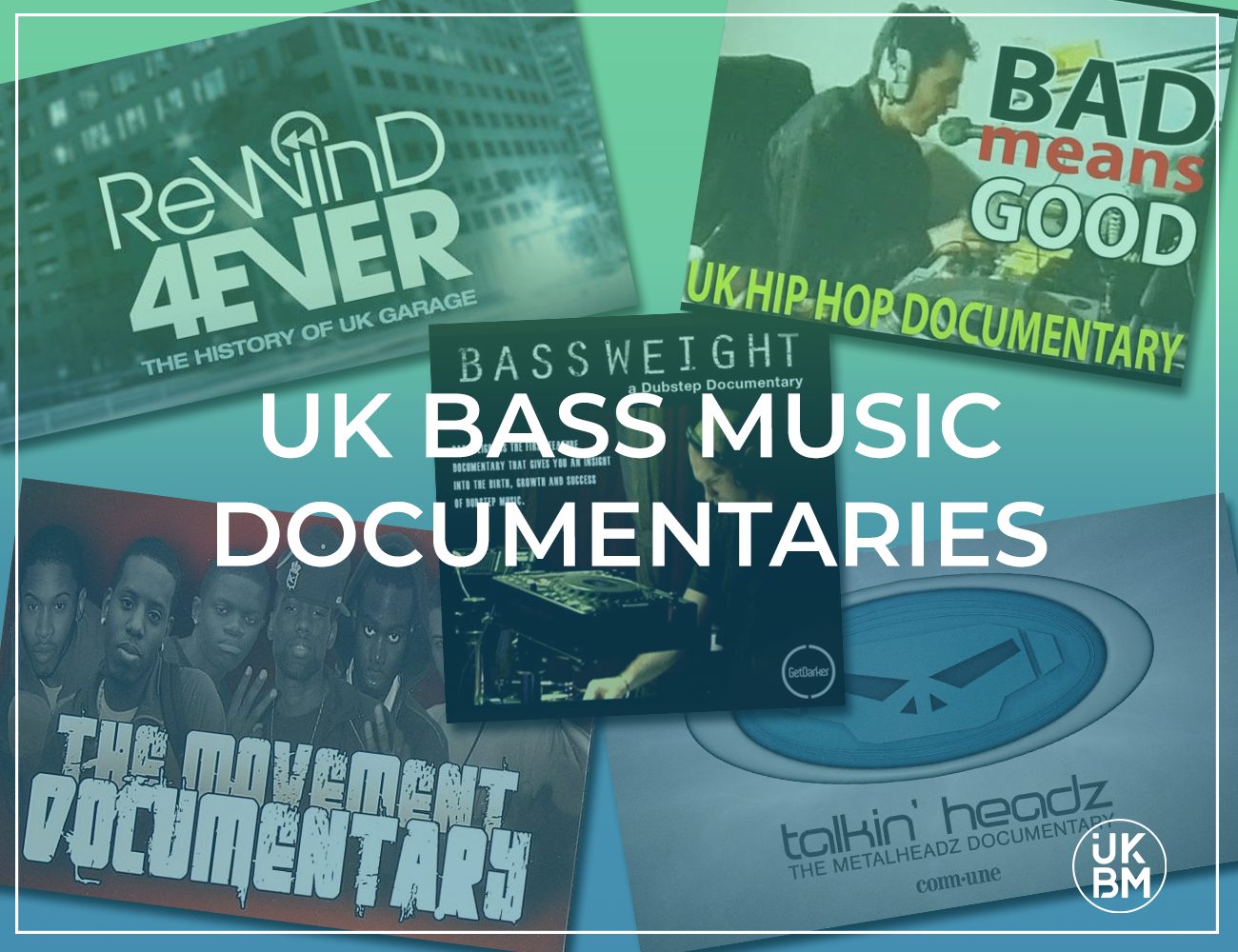 UK Bass music – rich in history. A scene like no other.

To depict the history of Bass music in the UK is tough: Where do you begin? Which genres do you focus on? How far back should you go?

Thankfully, this job has been done for us. There are countless long-form videos online documenting the history of the scene.

New to all of this? Only seen some but want to broaden your horizon? Well, we’ve got you.

The writers here at UKBM have compiled some of their favourite documentaries for you to binge on while in lockdown.

Be prepared to lose hours, LOTS OF HOURS, watching all these brilliant documentaries.

To make things easy, we’ve only listed documentaries which are available on YouTube – all free and available worldwide.

An incredible insight into the greatest period in Grime history.

The Movement: A Grime collective featuring Ghetts, Scorcher, Wretch 32, Devlin, Mercston, Lightning and DJ Unique. The likes of Boy Better Know and Roll Deep rightly receive adulation for being best factions in Grime; although, with them on the podium is The Movement. Lyrically, they are pound-for-pound number one. At the time of this documentary, 2006, The Movement were the new kids on the block. The noisy neighbours from North London, disturbing their fellow North London compatriots Boy Better Know while staking a claim as the best Grime collective.

This Risky Roadz short film does not have the high production of a BBC or Channel 4 documentary. Risky, real name Roony Keefe, made a name for himself by filming legendary Grime sets. Before GRM Daily, SB TV and Link Up, there was Risky Roadz. His relationship with the MC s gave him unprecedented access. The Movement documentary is raw. As it should be. It captures the very essence of the Grime scene back in 2006:  clashes,  freestyles,  live shows,  personal life,  relationships.

It makes me miss what Grime was back the; however, it makes me appreciate how big these guys made Grime.

Big up Risky Roadz and The Movement. A classic.

Okay, I cheated. This is not exactly a Bass music documentary. Bad Meaning Good documents the UK Hip Hop scene in the late eighties – 1987 to be precise.

Nonetheless, this is still a must watch for all Bass heads. The foundations of what we know as UK bass music originated from Hip Hop and soundsystem culture.

It’s riveting seeing rave culture from over 30 years ago. What really threw me was hearing MCs, UK rappers, spit in American accents. Blasphemy to some, yet this was life in the eighties and early nighties.

It’s not until a few years that jungle was to break barriers and become the mammoth force it was in youth and music culture; Garage, Drum and Bass, Grime and Dubstep followed suit.

Bad Meaning Good educates you on music and society of the era. Again, the very foundations of what built the current UK Bass music scene.  A must-watch for all music enthusiasts.

Other than ‘Dubfiles’ (which although great was more a series of interviews) Bassweight was the first proper documentary on Dubstep.

I still remember the hype it generated, mainly on Dubstep Forum in and around 2008 with a small trailer and some gallery stills, a whole 2 years it finally got released and it didn’t disappoint.

Beautifully shot the documentary does well at trying to capture and put on screen the essence of what the scene was like at the time and tells the stories of its key players.

Starting with Plastician taking on a tour around Croydon with some history lessons, then onto the legendary mecca-like Big Apple record shop, all the way though to Mala and the Deep Medi crew putting on a show in Amsterdam.

For me personally though, the best thing about this documentary is that Deapoh features. The forgotten man of Dubstep, Deapoh used to run the website Barefiles. If you were listening to any recordings of Dubstep DJ’s Rinse shows or any other station you were almost defiantly getting it from Barefiles. Dubstep was the first genre to really benefit from the instancy of the internet and that played a huge part of it accelerated popularity. Barefiles was a huge reason for that.

A real must for any Dubstep fan.

If you are looking for a documentary on UK Garage, look no further.

Rewind 4Ever is an in depth yet highly entertaining look into the history of UKG. From its roots and conception in the early 90’s, all the way to the controversial change of the sound at the turn of the millennium.

You’ll hear how it all started as the ‘Sunday Scene’ from the likes of Hermit, Daniel Ward and Norris ‘Da Boss’ Windross and other legends. They’ll tell you how Ministry of Sound Acid/Rave  club-goers would leave the club in the morning on Sunday’s and carry on the party in the surrounding pubs where the promoters were booking DJ’s playing Garage House records from the US but pitching them up to make them faster.

You’ll hear about the legendary Gass Club, the origins of 2-Step, the madness of UKG’s meteoric rise and chart success and then all the controversy of the sound’s darker turn courtesy of the likes of So Solid Crew.

This classic documentary shines a light on the ‘90s Drum & Bass scene. In particular, the legendary label Metalheadz, led by DJ and producer Goldie. Featuring thoughts and stories from some of Drum & Bass’ biggest names such as Ed Rush & Optical, Digital and Dillinja, as well as other people in the music industry such as hip hop legend Marley Marl, radio DJ Giles Peterson and a surprise cameo from none other than Noel and Liam Gallagher from Oasis.

This film documents the labels beginnings, from their legendary club nights held at the London club Blue Note that drew people in from all around the world, to the influence and mark they made on the music industry.

What I find so special about this documentary is the fact it captures a time when Drum & Bass was going through a transitional period from the sound of Hardcore Jungle to the Drum & Bass today. It shows how all these artists came in and completely changed the scene and did so on their own terms. Another thing to note is that watching this documentary a massive 22 years after it was first released, is that a lot of what they predicted the future scene to be like became true. For example, when Lemon D said that he thinks tunes will become a lot more minimal and today we have artists like Skeptical and Serum that do exactly that.

I fully recommend this documentary if you are new to Drum & Bass and want to learn a bit about the history of the genre and how it came to be the genre it is today or if you want to relive the good old days (the soundtrack on this is amazing!).