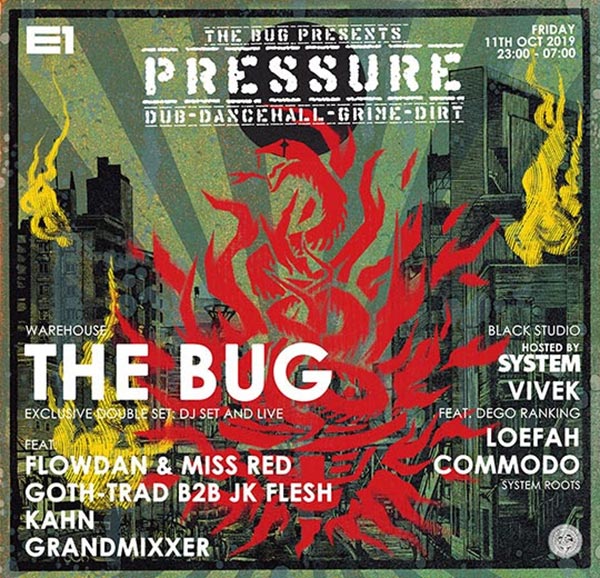 With his Pressure nights, Kevin Martin aka The Bug set out to bring only the best artists in a perfect bass heavy setting playing all manner of speaker wrecking madness. Big rigs and low ceilings are the order of the day with Pressure, with the music being played amplified in its intensity.

Starting off with nights in his adopted Berlin hometown, he definitely succeeded in doing this and the night has spread its wings to take on Amsterdam and London too with just as devastating results. Pressure makes its long awaited return to London at E1 on Friday October 11th and you can expect nothing less than total dancefloor annihilation from The Bug and his expertly assembled selection of guests.

The Bug will play an exclusive double set, consisting of a DJ set and a live set, boosted by longtime collaborators Flowdan and Miss Red who will vocalize the impending madness. Add to this Goth Trad going back to back with JK Flesh in what will undoubtedly be heaviness personified and sets by the inimitable Kahn and Grandmixxer that will take in so many 140bpm (and beyond) bangers and you have a lineup that is so highly anticipated

And that’s not all, if that was not enough, there is a second room which is powered by System and features Vivek & Diego Ranking, Swamp 81 mainman Loefah, Commodo and System Roots who will be bringing the best in bass heavy dub and more to E1.

Pressure’s mantra promises dub, dancehall, grime and dirt and you can be promised that these will be delivered in style. This is a night that is not to be missed at any cost and with a lineup as sublime as this, how can you afford to miss it.

UK Bass Music will be there to take in the action and will be reporting on the event shortly after, bringing you a blow by blow account on the nights action.

We also have an exclusive competition to win 4 tickets to the event over on facebook and instagram be quick! entries must be in by noon (GMT) on Thursday 26th September.