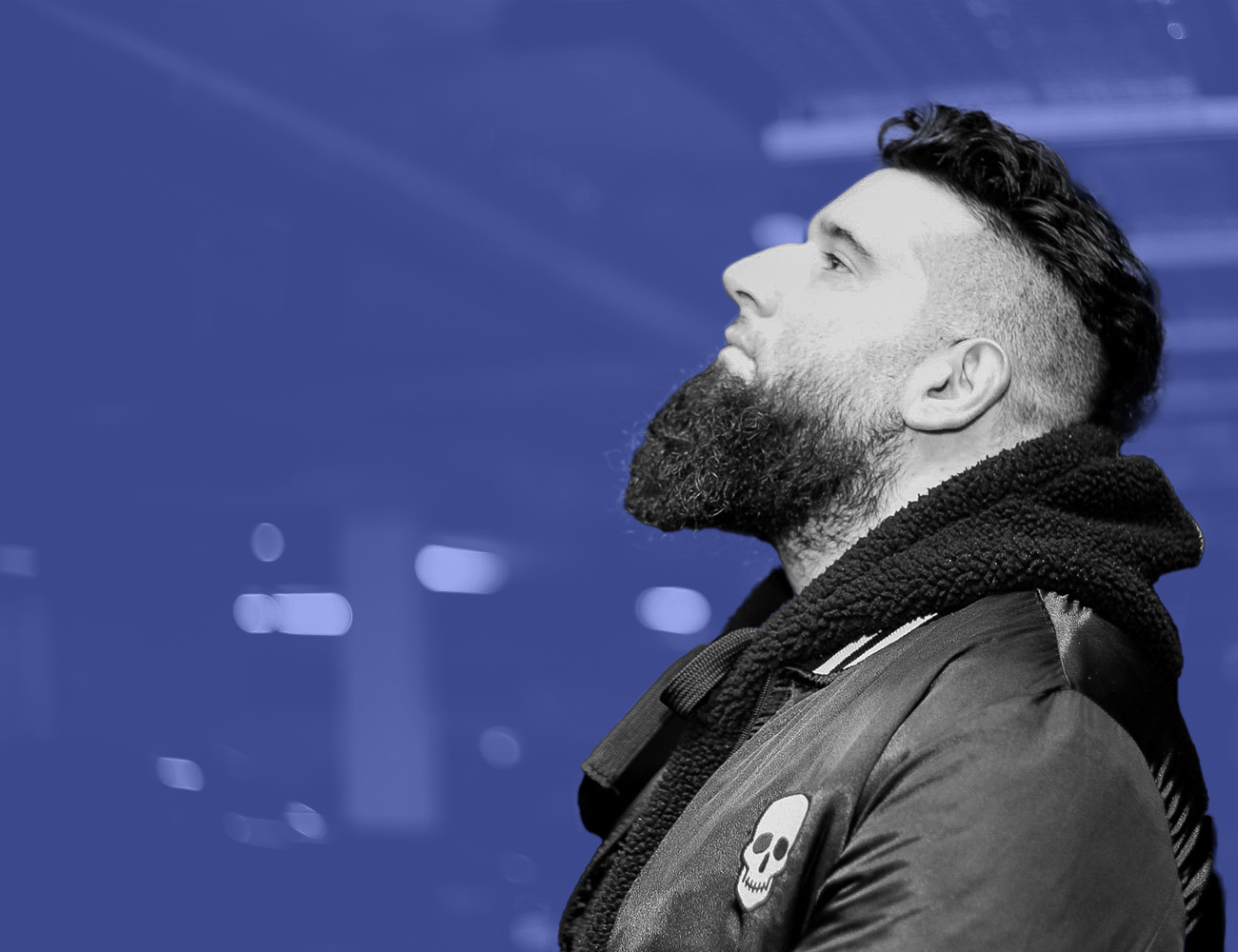 Moveltraxx boss Big Dope P has just released his debut album as an artist which is titled Mehlish.

As with his own releases and releases his label has put out, it is a collection of forward thinking tracks with its focus on the dance floor and a big ghettotech, footwork and juke influence.

We caught up with the London-based artist and label owner to hear all about Mehlish, it’s creation, what inspired this debut album, the history of Moveltraxx and what the label has coming up in the future.

Your debut album Mehlish is out now. How did the creation and recording process of the album go?

I started making hundreds of demos for the LP in 2016/2017 and took 3 weeks during lockdown last year to finally pick and finish 11 of them that respected the vision I had for my first album.

With this being your debut album, how excited are you about getting it out there?

Definitely excited to finally be able to share these songs I had for a very long time. I really needed to make and release this record to reflect on all those years making music, touring and running my record label Moveltraxx, the people I met during this crazy journey and the life that goes with it. As soon as I finished the LP, I had a relief feeling and immediately started working on the next one.

What does the album title mean and what made you call it that?

Mehlish means “it’s ok / don’t worry” in arabic. It almost became a motto like whatever life is gonna throw at you, keep things in perspective, don’t dramatise, find solutions.

What were the biggest influences on the sound of the album?

I would say it goes from Chicago Footwork to 80s Funk via French Touch, Rap and Arabic Music.

You’ve got artists like TT The Artist, DJ Slugo, Karlito Mighty Mark, DJ Jayhood, and Feadz featuring on the album. What did they bring to the album and it’s sound?

They are all artists I’m a huge fan of. For the vast majority this is people I have known for years. They all brought what makes them unique but in a new context to create something different. I’m really happy they trusted me to get out of their comfort zone and followed me into my world.

Have you been pleased with the reaction your new music has had so far?

Yes, I’m really happy with the feedback on the first singles, people seem to love them. I hope they will love the full record. I did not make those tracks to please DJs or Radios so it’s really gratifying to wake up everyday to nice messages, worldwide airplay, videos of people dancing to the tracks or DJs playing them.

Have you got plans to take Mehlish on the road and into the live arena?

I was supposed to do a tour this winter that I unfortunately had to push back in 2022 as I had a few health issues lately but I’m still gonna do something in Paris around the release date. I also have been working hard on a live show I am really looking forward to introduce as I have only been touring in a DJ format until now.

What else can we expect from your Moveltraxx label for the rest of this year and into 2022.

For the rest of the year, we have a new HIROKI YAMAMURA record coming and a new volume of our STREET BANGERS FACTORY compilations. And a stacked schedule for next year with a new DJ Earl album and a lot of surprises I cannot reveal now + the comeback of our label club nights.

How did the label start in the first place and what were your hopes for the label when you started it?

We were fans of Ghetto House, Juke and Footwork, Baltimore Club etc… Our goal was pushing these movements by releasing the originators first and also propose our take on it by bringing our background, culture and influences into the equation. That way we could share our passion and educate people while also bringing something new to the table. As an underground operation, to be honest, I never would have imagined making a living out of it, touring the world, syncing music for ads or tv shows but here we are and without compromising the vision which makes me very proud.

As an artist you have released on Fool’s Gold, Ed Banger, LuckyMe, Nervous and Ninja Tune. Were these labels a big influence on what you are doing with Moveltraxx?

Musically not really, I mean I obviously have a lot of respect for all these imprints but it’s quite different from what Moveltraxx does. I did learn a lot at their contact though, and always used that new knowledge to grow. Grateful for that.

Moveltraxx has released records from the likes of DJ Earl, Traxman and DJ Rashad. What have been some of your favourite releases on the label so far?

This is a very hard question. It’s impossible to pick just a few but here’s a couple records that would be a great introduction to the label for someone who would like to know what Moveltraxx is about.

This is probably my favorite Footwork record ever. It encompasses everything I love about this music. It respects the origins of the genre while still experimenting and sonically diverse yet coherent. I love this record so much.

We did a lot of label compilations, it’s a format I love. This one is my fav. I love it so much I never did volume 7. It really shows what Moveltraxx is about. You have Juke/Footwork, Baltimore/Jersey Club, House Music, Bass and more from legends and new talents and it’s still cohesive.

How did you get into footwork, juke, Jersey club music and ghetto house in the first place?

I grew up listening to Rap mainly and as a teen I was very excited when I discovered House Music as they were basically flipping the same Disco/Funk records but differently. I also started producing back then and I always ended up making something that was a mix of Dance Music and Hip Hop. Record shop owners were always weirded out to see a very young kid from the hood showing up and asking hella questions so as I started to develop cool relationships with them, one day I brought my productions and the guy told me he loved it and that it reminded him of Chicago Ghetto House and introduced me to Dance Mania. It was over haha. I studied this shit like crazy, collected all those records then Myspace arrived and I was able to connect with my favorite producers and discover their evolution as Dance Mania stopped many years before that and I was very excited with the Juke/Footwork sound from OGs like DJ Slugo, Deeon or Traxman + new names like DJ Rashad, Clent & co… I founded Moveltraxx when I was 16 and one of the first releases was a Waxmaster EP.

You are based in London, what are your favourite places to play out?

When I moved to London we did really cool Moveltraxx Label Nights / residencies at The Alibi and Ace Hotel (who unfortunately did not survive COVID) so these 2 clubs will always have a special spot in my heart as I have a lot of cool memories there. Crazy line ups too we had Feadz, Nightwave, Kush Jones, DJ Falcon, Sega Bodega, Alex Autajon, Mr. Mitch, Chippy NonStop, Crookers, Bastiengoat, Funkystepz, Morgan Hislop and many more + back to back sets with Sherelle or Naina.

What has been your favourite set that you’ve have done recently and what made it so special?

The set I did for for Teddy Kitano’s Loup Sessions last summer because I just came out of hospital back then and didn’t touch CDJ’s for a long time so it was definitely special. I love this mix and it represents me well musically + I got to play a lot of unreleased music too 🙂

With the end of the year fast approaching. What tracks and albums have been in constant rotation for you this year?

Well, all Moveltraxx releases of course. Everything Lauren Flax releases. Anz has been on a roll too, RP BOO & DJ MANNY albums on Planet Mu. Really enjoyed Gemma Dunleavy’s project as well. and always French Rap EPs & Mixtapes from Karlito, Hache-P and Carson. There’s a lot of good music coming out right now.

What have been some of the most memorable moments of your music career so far?

This one is hard too as I feel everyday is a blessing doing what I do considering where we came from. I guess travelling the world, going to places I would have never been to if it wasn’t for music and meeting amazing people on the road will always be a highlight. I guess I could list industry achievements but actually nothing beats traveling, connecting with people worldwide and being able to make music, sharing it with people full time and doing it on our own terms.

Mehlish is out now. Buy here.