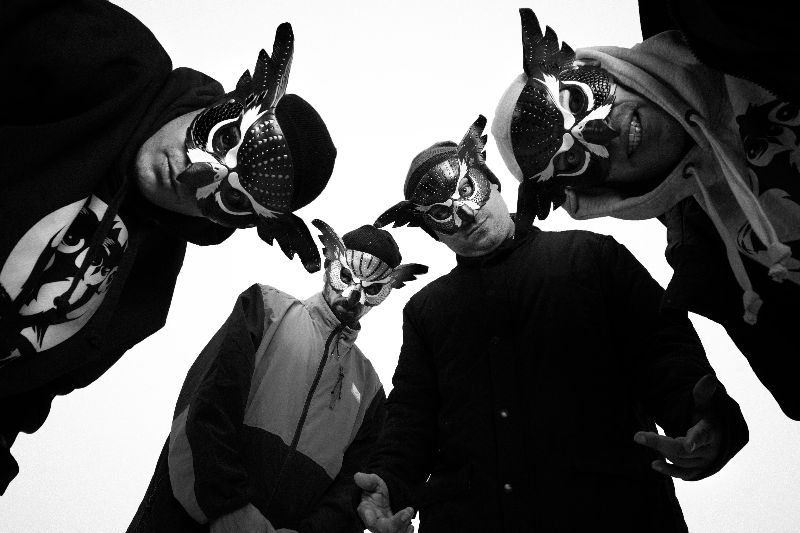 The last Four Owls album Natural Order came out five years ago so the follow up album, it’s fair to say, has been long awaited and the question would always be, was it worth the wait? Listening to that follow up Nocturnal Instinct (over and over, it’s that good) leaves the listener under no impression that it most definitely has.

This is an album that shines thoroughly on the true talent that courses throw the Owls ranks from the rhymes to the flows to the beats, the whole package. They’re all deftly executed and concise slices of pure hip hop and the group that consists of Fliptrix, Verb T Leaf Dog, and BVA have made an album they should be rightly proud of.

The relentless opening track Sound The Alarm features fellow High Focus alumni Smellington Piff and starts Nocturnal Instinct off on a high energy tip, the perfect start and a taste of what’s to follow and the anthemic Coming Home keeps the quality going over a soulful beat and all four Owls bring the Fire with their verses.

The Kool G Rap featuring Pioneer shows the Cold Chillin and Juice Crew legend bringing his formidable presence and celebrated rhyme style to a lurching beat and it sounds nothing but special as the Owls and G Rap trade verses.

Kool G Rap is only the first special appearance on the album though as the guest quota on Nocturnal Instinct is through the roof. DJ Premier once again brings his fabled production to a Four Owls track with 100 Percent and like their previous Collab Think Twice, it is nothing short of brilliant. The fact that Premier recognises the quality of the group is inspiring and giving a shoutout to Leaf Dog and the group during his already legendary beat battle with RZA is nothing short of massive!

RA The Rugged Man lends his breathless flow to the full throttle rhyme fest Air Strike and it all fits together perfectly that you wonder why they haven’t worked together before. Dark Days features a more sinister beat and features Roc Marciano doing what he does best with the rest of the Four Owls again, sounding on point throughout.
The last guest spot features Wu Tangs Masta Killa going toe to toe with the group over an inspiring beat, each verse flying by with consummate ease.

While the guest spots are all inspired choices, executed brilliantly and with everything sonically flowing impeccably, this is most certainly the Owls moment and the rest of the tracks that feature on the album most notably the mournful beats and  powerful flows of Let Go, the reflective Lessons and the track the album concludes with, All My Life Part 2 pack a real punch and feature everything you what to hear in a Four Owls track. That last track in particular sees Verb T, BVA, Fliptrix and Leaf Dog spitting fire in the most passionate and inspiring way, and its the perfect send off to an album jam packed full of highlights from these pillars of U.K hip hop.

This is an album that sounds triumphant above all else and you need that in this time of uncertainty, put it on, turn up loud and revel as The Four Owls and their guests give you a lesson in pure hip hop.